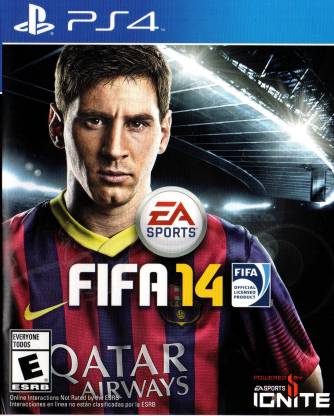 The pure exhilaration of having a realistic virtual football gaming experience is unbeatable and that is exactly what FIFA 14 offers. Developed by EA Canada and published by Electronic Arts, FIFA 14 is a single-player/multiplayer sports association football game for the PS4 console. This game was rated 3 by PEGI. IGN gave this game a score of 9 out of 10 while GamesRadar gave it a score of 3.5 stars out of 5.

The shooting mechanism has been altered in FIFA 14; players now have to focus on their approach angle and adjust their stride in order to get the ball into the goal. Now, players can also strike the ball when rushed or off-balance. The trajectory of the ball is now determined by realistic ball physics; players can now shoot balls with greater finesse and force. The pace of the match and the control of play depends on how well the ball is protected.

A lot of emphasis has been given to building play through the midfield in FIFA 14. Your teammates now have greater intelligence; defenders know when to extend their support and when to win back possession; attackers create space for themselves in the midst of good defenders. Players can maintain their momentum and possession of the ball while dribbling through the field. The First Touch Control feature varies a player’s touch when dribbling. The tackling zone is broader now, thereby giving scope for defenders to incorporate various types of tackles.

A competitive practise mode has been introduced to FIFA 14 so that newcomers can master the game with relative ease. In Career Mode, the new Global Scouting Network allows you to search for talented players at anytime. Discover the attributes of players by evaluating footballers and find the player who'll be instrumental in leading your team to glory. All the clubs, leagues and players who have been featured in this game have been officially licensed.

This game is amazing. A lot more refined than the PS3 version. The new celebrations are sick. Then the new camera angles! Overall, a brilliant game. A must buy if you love games
READ MORE

FIFA 14 is AMAZING on PlayStation 4. The graphics are much better on next gen, if you compare it on the XBOX 360 and PlayStation 3, and also, it's MUCH MORE realistic than FIFA 13, and on career mode, the commentators have an in - depth review of almost every player,if they are in good or bad form.

Great game ,it has so much skills and celebrations ...
READ MORE

I played it just one hour ansI realized the game was terrible. First it's graphics are really rubbish. My adviise don't by it at all. It will be waste of money..............!
READ MORE

Absolutely Must Have for the PS4

Amazing.
Player movement has been vastly improved and is more lifelike on Fifa 14.And do play it online to unlock it's full potential.
READ MORE