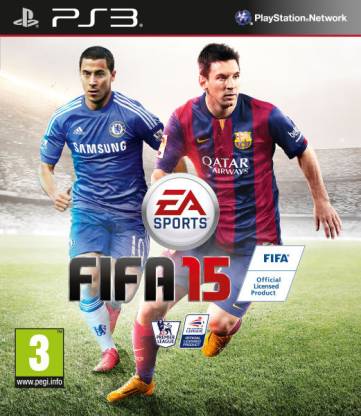 Here is your chance to have the most realistic virtual football experience yet. Rated 3 by PEGI, developed by EA Canada and published by EA Sports, FIFA 15 is a single-player/multiplayer sports association football simulation video game for the PS3 console. FIFA 15 is the latest installment in EA’s FIFA series of football video games. Lionel Messi has been featured on the cover of FIFA 15.

The Next Generation football player was created by the FIFA 15 development team for this game so as to make sure that players look as close to their true physical forms as possible. The physical details of players’ faces are highly accurate as a new physically-based rendering lighting system has been implemented in FIFA 15. New character models and body rigging make players feel more athletic and powerful.

Boot marks and slide tackles are much more visible on the pitch now. The ground’s surface becomes more weathered as the game progresses as in real football games. The Run Touch Dribbling feature lets you maintain control over the ball even during close-touch situations or while sprinting. The player biomechanics have been upgraded, hence, players will move and react in a balanced manner when they have possession of the ball. The player can perform sharper turns now when moving with the ball at lower speeds. Full-Body Defending is utilized by players to win back possession of the ball and to keep it. Big ball physics, pull/push mechanics, new shoulder barges, fresh character visuals and enhanced cloth technology are among some of the other highlights of this game.

The manner in which players interact with their environment has been revolutionized thanks to the Physically Correct Contacts feature. The movement of the ball is determined by the spin applied on it by an external object such as a body part. Furthermore, players can now take control of others from their team during corners, throw-ins and free kicks.

Better than any Football game in the market

before i bought it, i played the demos of both FIFA 15 and PES 2015 on my Xbox One, which led me to purchase this game as soon as possible. here are my pros and cons.

Pros: 1. Gameplay and graphics are realistic and better than pes
2. New boots are updated to players on the day they are launched in real world.
3. runs at 1080p 60FPS on both ps4 and Xbox one.
4. All licensed EPL stadiums feels more authenticity
5.Career mode and ultimate team are now better
6.historical kits unlocked from ...
READ MORE

guys Im an avid FIFA fan and I played fifa 15 fr a week r so heres my review...
the graphics have improved way to good... the players look more real.. ur clothing gets dirty..the pitch becomes weared out as u go on ... these r the visual changes..
as for the gameplay theyu have overhauled it... the goalies r way better at saving... shots n headers r difficult to take.. it takes some time to get adjusted...
so its really worth to buy it.. JUST BUY IT
READ MORE

Been playing lot of FIFA titles since Fifa 09 but nothing's quite like this FIFA 15 ; The over all representation ,start up , menu-style and IGNITE powers this title with live like experience for the first time in FIFA franchise .

MATCH:
Pitch- Awesome ! The pitch is left with marks(fall,slide,hustle,etc.) as the game progresses.
Players- All most every players looks authentic to their real live counterpart .
Ball- The real time integration of the spinning ball and goal line decision are re...
READ MORE

The Game Was Amazing But The Problems Were Minor.

The game was amazing and the problems were like understanding the controls and getting the connections online.First of all if you want to get a game for having fun on weekends without any connection,this is an ideal game for that.and it has career mode and ultimate team mode are very fun and need xbox live connection as well as online connection.so its a game for an ideal game if you collect fifa games.
READ MORE

Awesome product .. got in discount as well .. keep spreading smiles all over with big billion day offers n others offers ..
READ MORE

The best FIFA installment till date.. Who the hell rate it single star? I thing mario is good game for them. The control is really mind blowing. The graphics is awesome and too neat and clean. Not a single bug found.
READ MORE

The gameplay is very realistic. Whatever FIFA 14 I had played, the game seemed kind of slow to me. But FIFA 15 is fast, fun to play. Players look better than ever. The wear and tear of the pitch and clothes getting dirty is exaggerated. AI is good enough. Online is smooth enough. Graphics is great and the stadiums are amazing. There are more small things you'll notice while playing. The skill dribbling pressing L2+R2/LT+RT is better than FIFA14. But if you have 14 then you can wait for 16 but...
READ MORE

Its a wonderful game with amazing graphics and fluid motion control. The details are clearly visible during tackles and tricks. The game is far more realistic than Fifa 14 and the gameplay has also improved considerably. Its a must have in your collection.
I didn't purchase the game from Flipkart but downloaded over the net for free. Works great :D
READ MORE