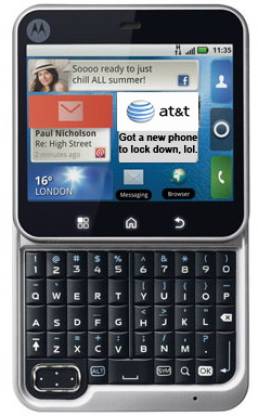 Description
The Motorola Flipout is an Android 2.1 QWERTY smartphone sporting a sleek swivel form factor. The phone comes with a 2.8 inch capacitive touchscreen that supports 256K colors and packs 320 x 240 pixels. The Flipout is powered by a 600 MHz ARM Cortex A-8 processor , and handles all the commonly used apps (Facebook,file/task managers and games) without the slightest hint of lag. Motorola Flipout ships with four interchangeable covers allowing you to choose between red, white, black or green panels.

Motorola has also thrown in a magnifier selector, which comes handy when you want to place a cursor in a precise location while editing text. The Flipout is fitted with a 3.1 megapixel camera with a preview mirror for taking self-portraits. The phone can also record videos in 352 x 288 pixel resolution at 30 fps.

Below the display are the three touch-sensitive buttons of Menu, Home and Back. When you nudge the bottom left corner of the screen upward, the phone 'flips out' to the right, revealing the QWERTY keypad. The hidden physical keypad on the Flipout looks small but is actually larger than many other portrait-style keypads. It's a full 5-row QWERTY keypad with good amount of travel and spacing. The phone features an accelerometer sensor for auto-orientation and a proximity sensor for auto-turn off.

A Li-Ion 1170 mAh cell powers the Flipout and gives a talk time of 5 hrs on 2G networks and 4 hrs 3G networks. The 150 MB of internal memory in the Flipout can be expanded up to 32 GB with microSD cards.

Connectivity-wise, Motorola has packed all existing wireless options into the Flipout, including 3G, Wi-Fi, Bluetooth and A-GPS for satellite navigation. The preloaded Google services in the phone include Gmail and Google Contacts, an Android browser and Google Maps. The Flipout supports access to Facebook, MySpace and Twitter with live updates on your homescreen.

I bought this phone on 21 August 2011, for Rs. 8499. Having used it for more than a year, I feel good to write a review. May this be of help to people looking to buy it second hand.

I wanted something unusual. Don't quiet remember how I came to this phone. I had seen this product being reviewed on NDTV Cell Guru. I decided to buy it for its unique shape, after watching and reading many other reviews.

Back when I brought this phone, Android 2.1 was next to the latest version. But now it is t...
READ MORE

I ordered my phone from flipkart....was a bit reluctant in buying a phone online but it seems the easiest way to get a phone now.
Flipkart has exceeded my expectations on it's speedy delivery, customer support,prices....As we know, it's the Amazon of India :)


About the Phone, Flipout is nice looking phone with Android 2.1
The processor and all is fast but the only two drawbacks i found was the camera(i don't need it much)...the camera could have been better.
Rest...i loved it!!
READ MORE

This phones is Best!

This phone is superb!

-Small size but still 2.8 inch screen.
-Motoblur is unique and superb upgraded version of 2.1 android.
-Phone is dashing enough to attract anyone.
-Pinch to Zoom is just awesome feature.
-3G,Wifi,Qwerty,Camera,FM,BT...what else you want in 8499.

DOn't disappoint on resolution. It is just unobservable drawback.
It can disappoint a little to camera lovers.
READ MORE

i wish i'd had know of about flipkart earlier....
i bought this phone for 14k in jan this year... though am not sure if the discount was available then but now i think i could've saved some money...
the phone is just fun.... am not much of a camera lover so it really doesnt matter... but i loved it... the music is awesome and the headset quality is better than sony... and its so cuteeeeee.......
is the anyone who knows where to buy more colourful back pannels...
READ MORE

Ausum is the word

Well ppl who'r lookin forward for trying a hand on an android shud definitely go for this one.
the only drawbacks of this phne are:

First of all i don't think this phone is available in the market anymore...even it is, not at this price.It's a shame.

This is an awesome phone...

Looks are its first thing that catches your attention...flip style is out of this world...many people say its for girls...but really its stylish for anyone.

Using android after blacberry is refreshing and joyful.

I have been using this since last 2 years and not a single complaint so far. Motorola really justifies its brand value which is proved by this piece. Though the phone is not equipped with powerful processor and other stuffs but the hardware quality is unmatchable to other products in the segment. Only reason I purchased this is for its uniqueness and smart design. Though camara quality is below expectation and phone has considerable lags in all operations because of its weak processor and RAM.
READ MORE

this is one of the most stylish phones... my friends keep asking about it... even the srtangers have a look at my phone... the flipping design is awesome... cooooooooooooooooooool phone... really loved it...!!!!
READ MORE

cool phone.. got mine last week.. has been a guy buy till date.. lots of aps to choose from, though a but touch to navigate, but i guess i'll get the hang of it soon enough..
READ MORE

A device which is completely a piece of MIND!!! What an INNOVATION!!!
READ MORE

Mobile Skin Stickers
Min. 50% Off
Shop Now
Back to top