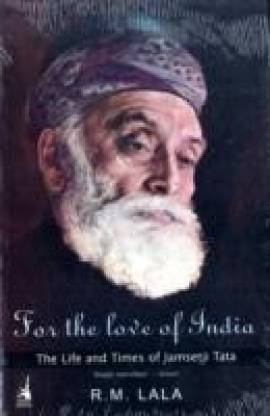 For The Love Of India (English, Paperback, Lala R M)

For The Love Of India  (English, Paperback, Lala R M)

Jamsetji Nusserwanji Tata was born in 1839, and in his lifetime India remained firmly under British rule. Yet the projects he envisioned laid the foundation for the nation's develoent once it became independent. More extraordinary still, these institutions continue to set the pace for others in their respective areas. For, among his many achievements are the Indian Institute of Science in Bangalore, which has groomed some of the country's best scientists, the Tata Steel plant in Jamshedpur, which marked the country's transition from trading to manufacturing, his pioneering hydro-electric project, and the Taj Mahal hotel in Mumbai, one of the finest in the world. In these as in other projects he undertook, Jamsetji revealed the unerring instinct of a man who knew what it would take to restore the pride of a subjugated nation and help it prepare for a place among the leading nations of the world once it came into its own. The scale of the projects required abilities of a high order. In some cases it was sheer perseverance that paid off"as with finding a suitable site for the steel project. In others, such as the Indian Institute of Science, it was his exceptional persuasive skills and patience that finally got him the approval of a reluctant viceroy, Lord Curzon. In For the Love of India, R.M. Lala has drawn upon fresh material from the India Office Library in London and other archives, as also Jamsetji's letters, to portray the man and his age. It is an absorbing account that makes clear how remarkable Jamsetji's achievement truly was, and why, even now, one hundred years after his death, he seems like a man well ahead of the times.

It contains all the matter which you would want to know about the great visionary. His struggles, his determination, his farsightedness, and most importantly his love for his motherland 'INDIA'. A must buy book for TATA enthusiasts and people who have a little bit interest in Jamshetji TATA and his early days.
READ MORE

A book dedicated to India's industrial evolution in the 19th century and the hardships of building one. Also emphasize on the struggle of educating Indians during the period. A brief of IISC AND TATA STEEL estbl.
READ MORE

1)The coverage of the life & Struggles of Jamsetji Tata is just fantastic.
2)Photographs of his family members which is as old as 150 years are also there in this book which is very rare even on internet.
3)This is the only biography on jamsetji tata written till date.
4)All the books by R.M Lala is always good.