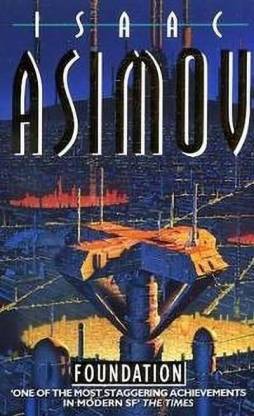 Get notified when this item comes back in stock.
Home
Books
Fiction Books
Science Fiction Books

The Foundation is Isaac Asimov’s classic work of science fiction.

On Trantor, the capital of the twelve thousand year old Galactic Empire, Hari Seldon, a mathematician and psychologist, has developed psychohistory, a new field of science and psychology. The Empire is slowly decaying, almost reminiscent of the Western Roman Empire. Seldon’s mathematics proves that the empire stands on the brink of destruction, and this angers the aristocratic members of the Committee of Public Safety. The events that follow set off a chain reaction which changes the Empire forever. Seldon gathers the brightest minds in the empire to save it, forming a sanctuary Foundation. In their hands rests the fate of the Empire, and civilization itself.

Isaac Asimov was an American novelist, short story writer and professor of biochemistry at Boston University. He is best remembered for his science fiction novels, including I, Robot, Foundation and Empire, Foundation and Earth and The Robots of Dawn.

Considered one of the pioneers of the Science Fiction genre, Asimov also wrote under the name of Paul French. A long-time member and vice president of Mensa International, he was awarded the Hugo Award and the asteroid 5020 Asimov, a crater on the planet Mars, and a literary award are named in his honor.

Isaac Asimov shows a pretty rough future moving on to an era where the existence of the Earth itself has been forgotten. Psychohistory is seems more believable a science rather than a fancy concept.

The book is composed of 5 short stories rather than a lengthy monologue. Mr Asimov doesn't waste any time setting things up, rather moves straight to the point in each of those stories. This makes the book pretty much fast paced and exciting.

Isaac Asimov shows us why he's considered one of the greatest sci-fi authors of all time with this masterful work. Inspired by the "Decline and Fall of the Roman Empire"(a spectacular work of literature by itself), he spins such a thrilling, complex, futuristic tale of galaxy-wide scope spanning over hundreds of years that almost everything else pales compared to his genius. Most modern sci-fi novels have at least some element ripped-off the Foundation series. If you're looking for a book tha...
READ MORE

The Standard for Sci-Fi Writing

While it would be quite unfair to call the ‘Foundation Series’ Asimov’s magnum-opus as his genius is seen in most of his works, it deserves to be right up there with the all time best.

Asimov is the final word on sci-fi writing, and this book proves the point. Set in the distant future about a dying galactic empire it covers various aspects such as: technology, society, politics and blends it in beautiful way. This is the 3rd book in the series, and can be read as a standalone. However read...
READ MORE

If you like the science fiction, this book is must read. I accidentally put the order for the middle book in the 'Foundation' series. Nonetheless, reading this book is really a pleasure. Following is the chronological order in which the entire series should be read.

ORDER OF THE BOOKS

I was disappointed when I found many spelling mistakes and other editorial errors in my copy. And hence, I would have to rate the book down for professionalism.
And being a kid, I desperately needed a dictionary since Asimov uses hard, long words. His style is inornate. So those who look for style while reading should be wary. But the way he makes the readers reach the point is commendable. Though I had to read the book twice to fully grasp what he was trying to say, the experience was fulfi...
READ MORE

Quality of the book is very cheap, I doubt it's authenticity.
READ MORE

It is that kind of si-fi which also provides a platform for religion, politics, trade, civic leaders, civilisation to play its part along with much obvious technology. The story revolves around dying Galactic Empire and vision of brilliant although misunderstood psychohistorian Hari Seldon, who has predicted the death and process of beginning of new empire. He who highlights the sense of dark ages and tiring process of evolution of civilisation to a better empire. Although some of the technol...
READ MORE

one of the worst book i ever read. No literary invention, tasteless language and a plotless story. This book is about some galactic empire and the rest is complete pseudoscience
READ MORE