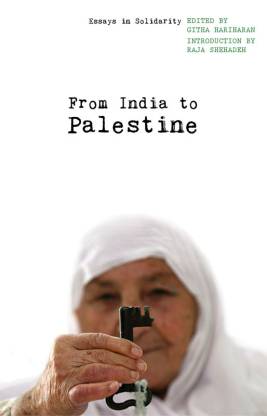 From India to Palestine is a collection of fourteen essays on the relationship between India and Palestine-Israel by activists, scholars and writers.

From India to Palestine offers deep insight into the mutual and often troubled relation between India and Palestine, and the significant role both countries play in our times. These thoughtful essays will help the readers to reconsider the issue of Palestine outside the western frame of mind.
This book gives a detailed account of the Palestine. In 1948, Israel was created on Palestinian land, which led to several Palestinians losing their homes. They were forced to leave their own land and become refugees elsewhere or in their own country. For over fifty years now, the Palestinians are suffering and have become homeless.

India has always supported the great political struggles in the world and has always maintained good historical ties with the Arab world including Palestine. During the Indian struggle for freedom, both Gandhi and Nehru had expressed that India completely supported the Palestinians struggle for their homeland and saw it as a genuine struggle against colonialism. However, India’s policy towards Israel changed drastically in the late 1990's as Israel had become a major supplier of arms and ammunitions to India.

The essays in this book provide valuable information to the readers about the present relation between the two countries and the various factors that led to change in India’s relations with Palestine.

Githa Hariharan is an Indian author and editor based out of New Delhi. She was born in Coimbatore and grew up in Mumbai and Manila. Githa completed her BA in English from Bombay University and MA in mass communications from Fairfield University. She has also authored The Thousand Faces of Night, which won her the Commonwealth Writers' Prize in 1993.

Read More
Specifications
Book Details
Contributors
Have doubts regarding this product?
Safe and Secure Payments.Easy returns.100% Authentic products.
You might be interested in