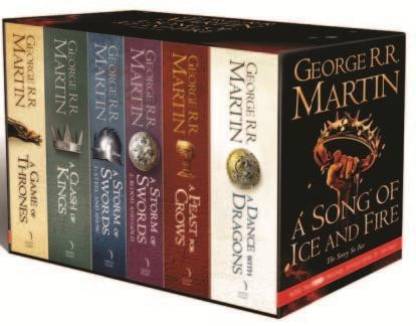 Sold Out
This item is currently out of stock
Author
Martin George R.R.
Read More
Highlights

A Song of Ice And Fire (Set of 6 Books) is a fantasy series of epic proportions, with a complex plot and many story threads.

A Song of Ice And Fire takes place across two continents, Westeros and Essos. In these regions, seasons last for years. It has been summer for many years, but winter is approaching, and the turn of the season also triggers many momentous events. There are three distinct storylines, although they are ultimately interconnected.

Many centuries ago, the Seven Kingdoms that ruled Westeros were united under the powerful Targaryen Dynasty, who had the service of fire-breathing dragons at their disposal. This dynasty came to an end when the dragons apparently became extinct.

There was a power struggle over the Iron Throne, once held by the Targaryens and the last Targaryen ruler was killed in a rebellion led by Robert Baratheon.

Now, after Robert’s death, his young son, the cruel and self-absorbed Prince Joffrey, occupies the throne, supported by his mother and her powerful family, the Lannisters. The northern fiefdoms in Westeros are held by the powerful Eddard Stark, who swears allegiance to Robert Baratheon.

In the far northern border of Westeros, there is a huge, centuries old Wall of Ice. This is the only barrier that protects Westeros from the unearthly beings called the Others. And, there are the Wildlings, humans who live beyond the wall. This Wall is protected by the sentinels of the Night’s Watch.

In Essos, the story follows the fortunes of young Daenerys Targaryen, the only known heir to the House of Targaryen. Her character grows through the series, from a innocent young girl sold into marriage, to a strong young woman who wants to reclaim the Iron Throne.
Complicating the situation are rival claimants to the Iron Throne who want Joffrey out of the way. The most prominent among these is Stannis Baratheon, brother to Robert Baratheon.

A Song of Ice And Fire (Set of 6 Books) slowly builds up the strife and tension, and is an epic tale of murder, treachery, intrigue, and ambition under the ever present shadow of the enigmatic Others. This series has been adapted for television by HBO, as Game Of Thrones. The six books in this set are A Game of Thrones, A Feast For Crows, A Clash Of Kings, A Dance With Dragons, A Storm Of Swords 1: Steel and Snow and A Storm Of Swords 2: Blood and Gold.

George Raymond Richard Martin is an American author and screenwriter.

He is also the author of A Song for Lya, Songs of Stars and Shadows, The Armageddon Rag, Portraits of His Children, The Sworn Sword, The Princess and the Queen, and A Clash of Kings.

His first story, The Hero, was published in the Galaxy magazine. He has also written horror stories, but is most famous as a writer of fantasy fiction. His epic, A Song of Ice and Fire, has earned him comparison with J. R. R. Tolkien. He has received a lot of recognition and honors for his writing, including Hugo Awards, the World Fantasy Award, and the Quill Award.

I'm an avid book reader and lover.
I always wanted to read A Song Of Ice and Fire 🔥.
One Day I got a deal that I couldn't resist ₹1600,I ordered it instantly.
Flipkart's service was great,received the books within 20 hours of placing the order.
There are 5 books with 7 volumes.
Book 3, A Storm Of Swords and Book 5, A Dance With Dragons has been divided into two parts.
The paper quality is also good.
Each book has almost 750+ pages.
Guess it would take me 2-3 years to complete them.
I hope by...
READ MORE

THE BEST SERIES EVER!!!!

Theme of the Series:
Seven Kingdoms fight for One throne, a gamut of politics, sex, violence, gore, incest, family feuds, magic, love, hate, loyalties, madness, heroism and death.
This has enough game to be a serious contender for the classic Mahabharath.

DISCLAIMER:
I'd like to warn one thing though, if you are interested in buying, which you may be, since you're reading this far into the review, each book is like 600-1000 pages, depending on which book you are reading, and by buying this ...
READ MORE

Wanted to gift it to someone who madly loves GoT. Trust me, it's a perfect gift for a GoT fan who loves to reader. The map inside was the cherry on the cake. Plus, ample bookmarks inside the box (around 18). Promising quality.
READ MORE

An enduring box set for the enchanting saga!

This is the HarperCollins-Voyager version, and must say, far far better than the other box set on Flipkart that is Mass Market Paperback (Random House). Comes in a sturdy, gorgeous box. The print and paper quality are way better than the non-Harper editions out there, so this set should be your choice if you are looking to add it to your collection.

A word about the confusion in the number of books. Though there are 5 books in the series so far, Books 3-5 have been published in US by dividin...
READ MORE

Received within 2 days in absolute pristine condition, The deal was made better by the fact that. due to some pricing errors, it cost me only 80/- . Yes, You saw that correctly, not 800, but 80/-. Thank You flipkart for providing such an amazing deal.
READ MORE

This review is not about the quality of the content of the books. The work of George R R Martin is beyond compare. It’s amazing. This review is about the packaging and the books themselves. I got this for Rs 1429, which is the lowest it has ever been. And which translated to about Rs 238 / book, which is very economical, compared to buying each book separately.

Firstly, I thought the books would be a bit bigger. But they’re not. All books are 11cm wide and 17.5 cm long. Now, you would think...
READ MORE

If you wanna pass your entire summer with your nose buried inside a book, then -- I don't know if LOTR or GoT is b...
READ MORE

First the condition of my books is very good. Thanks for that Flipkart. Now talk about Novels- George RR Martin Created masterpiece with these high fantasy/mystery Novels. A Song Of Ice And Fire contains 7 volumes of books. 2 books are still unpublished. In this set "A storm of swords" & "A Dance with Dragons" has divided into two books. If you have ever watched 'Game of thrones' you'll know what these books means to the fans. This book set also includes a map or Westeros & free cities. The w...
READ MORE

I ordered it for my friend on his Birthday and Its a wonderful gift.. Got 7 books in good condition and with a complimentary Map.. Packaging was ok ok, as it is just a cheap cardboard box.. however the books are really awesome and in great condition.. recommended to the GOT fans 😊👍
READ MORE

I think this is the best purchase I made in Flipkart. Great packing, Books in pristine condition with map and two bookmarks. Got it for just 1222. Waited for almost six months, happy that the wait was worth it. Need not talk much about the content. All together an amazing deal. Thank you Flipkart.
READ MORE