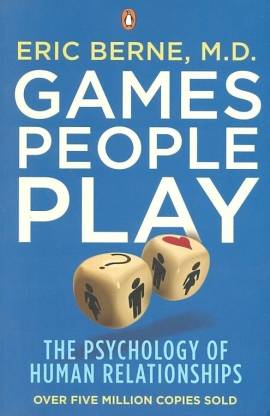 Published in the year 2009, Games People Play: The Psychology of Human Relationships is a book that contains a great deal of information on human psychology and it explains social interactions.

Games People Play: The Psychology of Human Relationships helps provide the readers with insights into what goes on during most of their social interactions. Berne tells the readers about transactional analysis, which can be utilized for interpreting social interactions. He also examines three roles, which is that of a Parent, Child, and Adult. He explains that a vast majority of behavioral issues stem from confusion of these roles. Berne makes use of an example to illustrate his proposition, which is an office setting where a parent-like boss begins to exercise his authority on his employees. This often results in rebellion, and child-like reactions from his employees.

He also explains that infants can slip into irreversible physical and mental decline due to lack of physical handling. Berne also goes on to throw light on certain studies that elucidate that temporary psychosis may occur due to sensory deprivation in adults. He explains that adults need to interact with individuals, as much as children need to, however, it may not always be possible to do so. This causes an individual to seek emotional strokes from others, which Berne describes as the fundamental unit of social action. He then uses this illustration to explain that exchanging strokes is a transaction, hence the term, Transactional Analysis.

Berne begins to tackle the issue of games played by individuals. He examines one of the most common statements people make, especially married couples, which is ‘If it weren’t for you’. He says that one partner often complains that the other often poses a roadblock in their attempts to do something they want. However, Berne throws light on the fact that individuals actually make such statements to throw the ball in someone else’s court, as a means of camouflaging their own weaknesses.

Eric Berne was an author and psychiatrist.

Berne has written A Layman’s Guide To Psychiatry And Psychoanalysis, The Structures And Dynamics Of Organizations And Groups, and Transactional Analysis In Psychotherapy.

Berne was born on 10th May, 1910, in Montreal, Canada. He completed his M.D. and C.M. from McGill University, Montreal. He then finished his residency at Yale University in Psychiatry, and was taught psychoanalysis by Paul Federn. However, Berne quit training for a while as he served in the Army Medical Corps, during which time he was also made a Major. After that, he continued studying under Erik Erikson and worked at Mt. Zion Hospital. Berne was married thrice to, Elinor McRae, Dorothy DeMass Way, and Torre Peterson. He passed away on 15th July, 1970, due to a heart attack.

This is a good book, in the sense it is well-researched and even followed and recommended in many colleges around.

However, for me it was too technical. I refuse to believe that human mind and behavior can be explained in such a scientific and calculated manner. Even though it is a small book, I kept loosing interest in it due to the generalization in this book.

But nonetheless, i would recommend people who like to understand human nature.. behavioral patterns should definitely give this bo...
READ MORE

While Seeing The Title, You Must Have Been Thinking That ,, It'll Lead You To The Tactics To Play With People...
But There Isn't A Single Thing Like That...
Though It Is A Nice Book ..
It Makes You Understand The Whole Picture About What Is Happening To Your Relationships, & Guide You Through The Behavioral Phase.. That What Should You Do In Such Situations..... :)
READ MORE

Understand your and others actions for

Games people play is a basic book on psychology, which everyone must read. It opens our mind to how we are slaves of the games we may play unconsciously. It does not need advanced knowledge of psychology, though some know-how definitely makes for a faster reading.

There are parts which a layman may not understand, but they are not necessary for understanding the book. Interested readers can always look for the meaning of these concepts elsewhere. (I myself read an paper published by Berne to...
READ MORE

This book mainly talk about various generalised situations that may arise in everybody's life. These different situations which the author refers to as 'Games' is very well analysed from every perspective which makes us say 'Yes! Exactly!' to every conclusion.

Even though the book speaks about things that happen around us, the way in which it was written is not simpler enough. It gets too technical at times which makes you feel that there could have been a little more explanation. Some may a...
READ MORE

Very well packed , a sealed book at such a low price and great condition , love the book , recommend to everyone !
READ MORE

This is a very good book on Transactional Analysis. However, a word of caution from me about the language. The book is written like a research paper with lots of technical jargon. You may need to refer the dictionary more than once on each page while reading the book.

It was my first purchase on Flipkart an I was impressed with time taken for delivery and packing of product.
READ MORE

This is a book which can help you to win over any and I MEAN IT ANYYYYYYYY conversation in your life.
And trust me lessons are never given they are taken. Take it, you will really feel the difference in your whole life after reading this.
READ MORE

I found this book on flipkart and ordered it right away as my dad had been asking for it a lot.
Got the book on 22nd and my dad just started reading it the second tim, he doesn't seem to be abe to stop himself from praising the book and the psychologist.
Thank you flipkart!!
READ MORE

0
0
Permalink
Report Abuse
+
All 31 reviews
Have doubts regarding this product?
Safe and Secure Payments.Easy returns.100% Authentic products.
You might be interested in