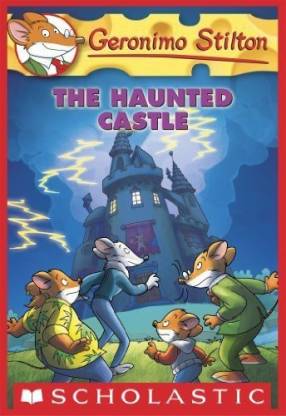 Geronimo Stilton: The Haunted Castle (Book - 46) brings children’s favorite mouse character, Geronimo Stilton back in action. Geronimo, who just happens to be at home and going about his usual business, hears his telephone ring. Its his uncle, Samuel S. Stingysnout. Geronimo is invited to Samuel’s scary castle that lies far off in a distant place in Mouse Island, along with his family.

Geronimo is hesitant to say yes. He knows this trip isn’t going to be easy. Plus, he hates surprises. But all the relatives are going to be there! And Trap, Thea, and Benjamin are ready to go! So Geronimo can’t say no. He decides to go, despite knowing that this would make for one scary trip.

Geronimo Stilton: The Haunted Castle (Book - 46) is the 46th book in this best-selling children’s book series. The main character is Geronimo Stilton, who is a talking mouse living with his other mouse friends and family in New Mouse City, Mouse Island. He is editor and journalist at a fictional newspaper, The Rodent’s Gazette. He is mild in his mannerisms and wishes to live a life of peace and quiet, but gets dragged away on crazy far-off adventures with his nine-year-old nephew Benjamin Stilton, younger sister Thea Stilton, and cousin Trap Stilton.

All the books in this series are written in an autobiographical style. The book’s intended audience is in the age group ranging from 6-12 years. It’s an extremely popular children’s book, as is evident from the fact that it has been translated into 35 languages.

Geronimo Stilton is the pseudonym used by Elisabetta Dami, an Italian author of children’s books.

She is the author of The World of Animals, The Mona Mousa Code, The Secret of the Sphinx, and Who Stole the Mona Lisa?

Elisabetta was born in Milan, Italy. She started her career as a proofreader at a publishing house owned by her family, and started writing stories at the age of 19. She had always carried a fondness for children. She spent her days, even at a young age, volunteering for sick children. With this experience, she began to generate ideas about writing children’s fiction with a mouse as the primary character. This series of books became a big best-seller both in Italy and abroad. And through the amazing success of her books, she was able to continue assisting children in need. She is the co-owner of the Italian publishing firm Piemme. She generates ideas for Geronimo’s adventures tales by travelling regularly to places such as Kilimanjaro and Sahara Desert. 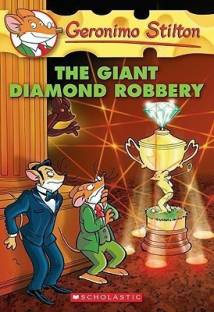 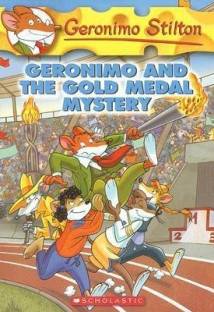 I love books but Geronimo Stilton is one of my favorite books.In this story I liked Uncle Samuel Stingy-snout and his castle Penny Pincher Castle. This story is about a ceremony of Mr.Uncle Bigwig.Uncle Samuel was really a very big penny pincher that's why Geronimo did not like him even Thea,even Trap and even Benjamin.This story was the best book of Geronimo Stilton and I am sure my friends will also like it
READ MORE

It was an amazing book . The packing was good it was in the reusable board .It is not harmful for nature but, the book rapping was in plastic. You should change it Flipkart. But Flipkart take less amount of book and I don't find a book name: Hug a tree Geronimo . It is a book of Geronimo stiltion . So, please take that book in stock.

Geronimo Stilton. Interesting series of books. My son wanted to read this book. Ever since he has came across Geronimo Stilton he had ordered many of those books. He simply enjoys reading and I also prefer it as it helps to culminate the reading as hobby in kids.
READ MORE

go on page 18 and the picture is same as the cover, oh what a adventure geronimo had, i ordered it from flipkart only, but my father ordered
READ MORE

I burrowed the book from my friend it was amazing I love Geronimo Stilton books.the story is geronimos uncle s.samuel stingy snout calls Geronimo and all of the stiltons and all of the stingy snouts to a ceremony Geronimo tells thea,trap and Benjamin to come to the ceremony but after that thea,trap,Geronimo and Benjamin finds out something read the book if others tell you the story you won't like it.
READ MORE

Best book.it is very adventurous and one of the best books from geronimo stilton!!!!
READ MORE