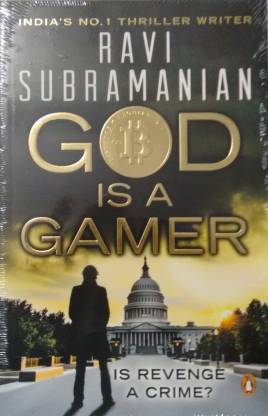 Ravi Subramanian's God is a Gamer is a thriller novel. It is set in the world of digital currency and the clandestine realm of the Dark Net.

Aditya is an entrepreneur, running his own gaming company. The arrival of a part-time drug dealer and full-time genius named Varun turns Aditya’s struggling company’s fortunes around. However, things are not as they seem. A banker slips from the rooftop of a high-rise building and falls to his death. A finance minister with his heart on his sleeve discovers that he has made some promises which will cost him far too much. An explosion in Washington D.C. leads the FBI to a chase in Mumbai. The investigators begin to plummet down a world where bitcoins are the only meaningful form of currency. Here, everything is governed by the Dark Net, a group of nefarious websites dealing with illegal transactions. In this world, God is a Gamer, martyrs are villains, the hunters become the hunted and the ancient Greeks teach the secrets of assassination. In this new novel, nothing is what it seems.

Ravi Subramanian is an Indian banker turned financial-crime writer. His books If God was a Banker, The Bankster, Devil in Pinstripes and The Incredible Banker are all bestselling titles.

Mr. Subramanian is an alumnus of IIM Bangalore. He is currently the head of a leading financial institution. He has won the Economist Crossword Book Award twice for his previous books.

Well if you want a light and easy story this would do.

English usage: 2/10 ( if you read George RR Martin,Salman Rushdie,Amish Tripathi or similar author you find the English usage mediocre )
Story: 4/10 ( nothing new, Bit-coins in story made it look good nothing more )

the book is well written, the chapters are short keep the readers engrossed and a superb ending.i think he has really done a great job
READ MORE

Great timing to release the book over the weekend. Just read it in one go.. I really like Ravi Subramanian books, but this one take a notch above the rest.. It will leave you guessing till the last page of the book! A perfect thriller.
READ MORE

Wonderful page turner - I am sure Indian audience will absoultely love the latest offering from India's answer to John Grisham.Cover is also nice and attractive. Book had lot of interesting concepts such as bitcoins, illegitimate networks, online gaming business models and banking frauds. Very easy on the brain and can be finisherd within a 2-3 hour flight journey.
READ MORE

I loved reading Ravi Subramanian's earlier books and I was looking forward to this one too. And must say that it totally lived up to my expectations. An interesting, intriguing and gripping thriller for sure, this book managed to keep me glued on to it till its last page. To add to that, must say that I found this book to be quiet well researched. The corporate parts of the story were so relatable; but for me this was the first book that I was reading on bitcoin. The kind of action that has b...
READ MORE

WHAT I FELT ABOUT THE BOOK

The Cover : Attractive. The silhouette of a man with the White House in the backdrop, the title of the book engraved in bold golden letters with the ‘O’ in God taking the shape of a coin adds a touch of mystery. The question ‘Is revenge a crime,’ further accentuates the mystery.

The Title : “God Is A Gamer” is indeed catchy & appealing and the story does justice to the name. As the story unfolds we see how destiny can shake even the strongest, how all our c...
READ MORE

REVIEW ON BOOK ADORERS
They say that the two most beautiful words in English language are Cheque Enclosed”. :-) We are all seeing the way “this money is making many things happen“. If normal money that comes with so many rules, constraints, taxes and conditions is that attractive and making us do many things to get it, imagine what a virtual “no-frills attached ” money can do. Ravi Subramanian, has picked this as the subject of his latest novel and created a gripping and page turning thriller...
READ MORE

A good read but not one of his finest

Ever since I read "If God was a banker" in 2007, I have been a fan of Ravi Subramanian's writing style. With each passing year, he brought out a new book (except for 2009) and I became an even bigger fan. He has authored 7 books till now, my favourite being "If God was a banker" and "The Bankster". No, I do not belong to a banking/financial background and yet he explains the banking concepts with such eas...
READ MORE

‘God is a Gamer’ is the first bitcoin thriller written by Ravi Subramanian. Being Indian’s one famous thriller writer, the author has presented a crime thriller covering a vast area from banking, gaming to ATM heist and bitcoin frauds.

The cover looks stunning and will automatically turn heads of the readers. As almost half of the incident takes place in the US, the white house in the cover seems relatable. Unlike Ravi Subramanian’s earlier books, this doesn’t have a mention of bank in the n...
READ MORE

He knows how to write. Go ahead.

Superb read. Mazda aa Gaya. One of the best book by author. Worth your time and money. Also quiet informative. My salute to authour for such excellent book. Too good.
READ MORE