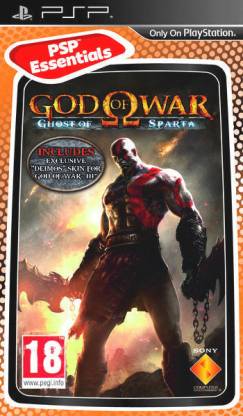 God Of War : Ghost Of Sparta  (for Sony PSP)

Description
As with all God of War games, Ghost of Sparta is a single player action-adventure game played from the third-person perspective that blends addictive hack and slash and puzzle play gameplay mechanics. Playing as the iconic, rage-driven Spartan warrior, Kratos, players face level after level of challenges illustrating the Ghost of Sparta's (Kratos') rise from uber warrior laboring in the service of the gods, to a god himself, following the defeat of Aries in the first game in the series. In the process, the game reveals secrets of Kratos' past only hinted at in previous games in the series. Gameplay, especially during boss battles and puzzle play events, utilizes the familiar God of War style on-screen button prompts to secure victory and advancement, with successful battles and puzzle challenges framed by stunning in-game cutscenes. The game features a more diverse cast of enemies, as well as bigger, badder bosses to tackle. In addition, along with Kratos' signature chain blade weaponry, Ghost of Sparta also features the ability for Kratos to utilize new weapons. These include: a spear and shield combo, which opens up the ability to combine new offensive and defensive tactics; and the Eye of Atlantis, a electrically charged handheld weapon that allows Kratos to shock enemies from afar and from different positions.
Read More
Specifications
General
Ratings
Ratings & Reviews
4.5
★
284 Ratings &
45 Reviews
5

This game is so awesome that I don't have words for it. Too good to be true. There are awesome bosses from Greek mythology such as Scylla, Erinys and many mini bosses such as Midas etc.
The only con of this game is that the main boss is the greek god of death, who is Hades but here he is named Thanatos. But that won't bother gameplay. I think of this as a con just because I really like greek mythology and it would bother you only if you are also a fan of greek mythology just like me.
The gam...
READ MORE

I own a God of War: Chains of Olympus and was blown away with the kind of graphics and gameplay and was eagerly waiting for Ghost of Sparta to be out in India. The Gameplay of ghost of sparta is a little longer than that of chains of olympus. This game does have a superior graphics than most of the ps2 games out there. The only con I found was some part of the gameplay being repetitive. If you are a fan of God of War series then you would like it.
READ MORE

If u have played god of war chains of olympus u must have thought that santa monica could never thought that they can top that level of quality again but they have surpassed it
Graphically
while you were playing this game u will feel that you are not playing on a handheld graphically its looks better than some of ps2 games like original god of war
Control
Psp lacks one anlog sticks and 2 shoulder buttons but even after that controls are good but only weakness is that they are no puzzles a...
READ MORE

If you are looking for a great game with imbalanced graphics and awesome gameplay this one is for you. In game movies are nice. Story is great. No multiplayer support though.
This is must buy for novice as well as professional gamers(Try it in GOD mode).
Value for money: 9/10
Gameplay: 9/10
Graphics: 10/10
READ MORE

Awesomeness at its best!

This is one of those games which have you on the edge of your seat almost every minute of the gameplay.I literally savoured each & every stage of this game. Amazing story line. In all, worth every rupee spent (guess thats an understatement).

Must have for every PSP user.
READ MORE

Thank you flippy for the awesome delivery. I was in a doubt before getting this game, but after the opening scenes and game play I'm just addicted to this game right now. A must BUY for every PSP owner. Keeping true to it's origin the story line, fights, power ups, boss battles, etc etc etc. its a game made for PSP. So I must say it's A GOD OF PSP. Stop pondering and just buy it..!! won't regret it..!! cheers
READ MORE

Awesome Game A must Own

This is one of the best game of my PSP and a must own for all PSP owners. The graphics are good and the controls are sweet the characters are unique.
READ MORE

very nice long game .the game play time is quite big , with better graphics god of war fans should buy this game .this is another awesome installment of the god of war series.this is the one of the top games in psp . if u dont buy it youll miss it .be first to buy the game when again in stock coz i ordered this game and after recieving the next hour i found it is out of stock. boy was i lucky
READ MORE

The gameplay features a unique, combo-based combat system and many new and signature weapons from the game series. The player controls Kratos, the Spartan who is the new God of War. Battle a range of infamous mythological creatures, such as Cyclops, Minotaurs and Gorgons, with a barrage of combo-based attacks and complete various puzzles in platform-style to progress through this visually stunning game.

God of War: Ghost of Sparta is a hack-and-slash, action-adventure video game that was developed by Ready at Dawn and SCE Santa Monica Studio and published by Sony Computer Entertainment. The game is set in the third-person perspective.

God of War: Ghost of Sparta received a rating of 18 from PEGI.

This disc is meant for the PSP console.