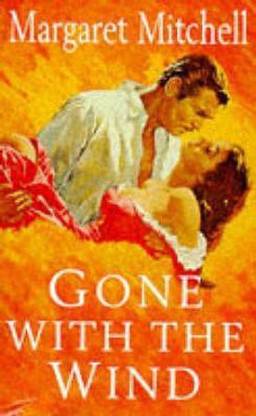 Gone With The Wind is a romance novel by Margaret Mitchell.

In this coming-of-age story set during the American Civil War and Reconstruction Era, a young girl must do all she can to fight poverty. Scarlett O’Hara is the spoilt daughter of a rich plantation owner. Following Sherman’s March to the Sea, she finds herself penniless. Now she must face crippling odds to survive. This book is considered to be one of the most widely read titles in the English language.

Margaret Mitchell was an American novelist and journalist. She won the Pulitzer Prize for Fiction in 1937, and the National Book Award for Most Distinguished Work of 1936 for the above novel.

Gone With The Wind is famous for the 1939 film adaptation starring Clark Gable, Vivian Leigh, Leslie Howard and Olivia de Havilland. The film won 8 Academy Awards, setting a record for the time.

It's literally a week after finishing this book that I can bear at all to write a review. I bought the book a few months ago,but its sheer size scared me off. Many a times I took the book, flipped through 3-4 pages and put it back in the shelf. And then finally I read it. And I loved it. This book is so utterly different from any other book I've read previously. In most of the love stories I've seen the protagonists are to epitomize all the goodness of human nature. They share, they care and ...
READ MORE

A must-read for any book lover!

There are just way too many things I love about this book!

One, it a journey into a life that I, a city-dweller in the 21st century has never, and will never lead; two, it has characters you easily relate to and feel connected to; three, it is a very effective portrayal of life in its true unfair sense and not the perfect, ideal one that we read about in a lot of other books.

Rhet Butler is another reason I read this book again and again, and each time I read it, I find myself wistfully wi...
READ MORE

A Must Read for Anyone With a Conscience

With Scarlett O'Hara,one of literature's most well known personalities, as it's lead protagonist, Gone With The Wind lives upto all the hype that surrounds it,as one of the greatest love stories ever,by actually not being an out-and-out love story.
A great narration that transports you to the not-so-familiar times of the late 1800s,real characters who have both virtues and vices and are therefore,both endearing and not so endearing at the same time,Gone With The Wind makes one see the other s...
READ MORE

Better than the BEST!

I cannot even put in words how amazingly wonderful this book is. Scarlett's journey of life becomes your journey and you never want this journey to end. Each and every emotion is depicted so well that one can actually feel them. It is a EPIC LOVE STORY that will never ever have a competition. Respect to Margaret Mitchell. A must read and must keep for your entire life.
READ MORE

I took a courageous step by picking up Gone With The Wind as usually I try to keep my distance from such classics. That said, this would be my 5th classic and am I disappointed? Hell no!

This book is a masterpiece on another level. And most importantly it takes immense guts to start writing a book over 1200 pages with your central character being a stupid, spoiled, selfish prick. Every time I thought that this is the time I would end up liking Scarlett O'Hara, I was proven wrong. Fiddle-Dee-...
READ MORE

The story is good but the quality of product is very bad. The pages are not good according to the price charged. Besides the book and font size both are very small. I do not recommend this book.
READ MORE

its such a classic novel ... one of the best works in english literature one of my personal fav ... scarlett is a delight to read ...
READ MORE

must read for everyone!

The best novel I have ever read...
Though from a different era and different culture, this is one novel which is a must have for everyone (even if you dont read)

Margaret, portrayal of Scarlet and Rhett, though negative , makes us love them. Bringing out emotions such as this is a rarity. The focus is not only on the main characters but the way the author brings out short lived characters of Tartetons and Caverts, is spectacular and leaves you heart wrenched on their demise.

We have been br...
READ MORE

Magic which you have to experience!!

The journey of Scarlet-O-Hara is wonderful. The war threw out every happiness of her life.Love,money everything was gone. She was a fighter who fought through all odds! From the noble lady to the woman who started working in the fields coz of the war, the love life of hers, everything was exciting and paining. As someone above had written, its an abstract feeling like love. You have to read and experience it!!!
READ MORE