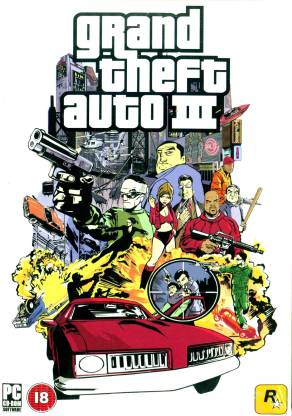 The celebrated sequel to the highly successful GTA 2 is here, aptly named Grand Theft Auto III or GTA 3. The game was developed by Rockstar North and published by Rockstar Games. The title serves as a predecessor to the 2 D version, GTA 2. The first 3D GTA 3 has been a resounding success among GTA fans and continues to be a great game for nostalgic players and new recruits alike.

The role play game is filled with action adventure elements and comes with a gripping Single Player campaign as well as an interesting Multiplayer mode. In the single player campaign you come across various scenarios that make you do favors for mob bosses, instigate rival gangs against each other, steal cars and conduct assassinations to stay ahead of the game.

The game features a complete 3D city with lots of NPCs and dynamic environments. This approach gives a non-linear form of gameplay that players love. It also helps in generating enough interest among players to spend long hours with the game. It has a PEGI rating of 18 for simulated violence and strong language.

I got this game within 2 days or ordering. This game might be old but kick-ass. A pioneer in open-world games. I have nostalgic memories for this great game as it was among the first pc games i played. I prefer this to vice city. A must have collectors item.

Thank you flipkart for the great work you do :)
READ MORE

Taste the city which is still lasting!

The actual liberty city was introduced in GTA 1 but it was like mario.The 3rd person view has became classic in this part.And this one is much bigger than Vice City,graphics are low but hey,it was game of 2001,actually this was the beauty of it such a game in 2001 meant really something, and even after playing games of nowadays I don't feel bad for this.
Just try it!Experience the origins of GTA.
READ MORE

The first thing that comes to your mind while purchasing any GTA game, is the NAME OF ROCKSTAR GAMES on the cover of the game .. and you feel like that it is going to be one hell of a game.. Well , GTA 3 does maintain this reputation of ROCKSTAR GAMES reasonably and decently.. though with some pros and cons..

One of the best game ever!

First of all love flipkart, they have everything you need in an online shopping website plus they have excellent service.
GTA III is the best game and my first PC game I played in my PC. Many people say Vice City or San Andreas was better but i love GTA III more because this game alone started the craze of Open World Third Peson Shooter. This Game is a must buy for any GTA fans out there.
Just pop this game and get ready for some fun.
READ MORE

its an absolutely amazing game. the graphics are brilliant and the missions are truly fascinating and adventorous.Its a real 3d game.With this game we get a map of liberty city.this game contains the use of strong language and blood violence scenes.Its not the best gta game but than also a very fine game.
READ MORE

Not as good as vice city

This game was not good as san andreas. Missions are very boring. Story was good. It could be a better game. GTA should add something better to satisfy their fans. Vice city was a big hit but time is changing. They have made the game same like vice city.
READ MORE

Thank you for the faster delivery.
I've played this game before and now i am playing this game again.
I love it. Buy if you like..
READ MORE

must buy [you beuty rockstar]

Rockstar strikes again.This game is marvelous with cool graphics and gameplay.It will work on your PC.Overall this game is the beeeeeeeest.
READ MORE

Easy installation and works without a problem. Very good time-pass game. The cars are very good in this version but no bikes is a sad thing. Must play this game.
READ MORE