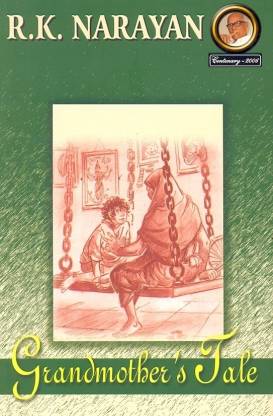 Grandmother’s Tale is a novel that throws light on several trivial issues during India’s pre-independence period, such as child marriage and gender discrimination.

In Grandmother’s Tale, Narayan tells the readers about his great-grandmother, who used to scold him, yet encouraged him to recite a Sanskrit lyric daily. The Sanskrit lyric stated that the perfect woman is she who works like a slave, looks like a goddess, gives advice like a minister, has patience like Mother Earth, and be courtesan-like in the bed-chamber.

He tells the readers about how his great-grandmother was married as a child, and how her husband left her shortly after. The priestly traditions forbade a child bride from visiting the temple unless her husband was found alive. Back then, widows were considered unclean. Bala, his grandmother then set out on a journey to find her missing husband. After years of searching, she finds him in Poona where he is a thriving jewelry business owner. Enraged by the fact that he got married again, she gets rid of his second wife, and becomes the wife in his house.

Written in Narayan’s witty style, Grandmother’s Tale is a stunning novel that highlights certain relevant issues during the pre-independence period of India, one of which includes child marriage. In this book, Narayan portrays the difficult times faced by individuals of those times with full grace, and has kept the language highly transparent.

R. K. Narayan was an author.

Narayan was born on 10th October 1906, in Madras, British India. He finished his schooling from the Maharajah’s College High School. Narayan completed his undergraduate degree from the Maharaja College of Mysore. After a brief stint as a school teacher, Narayan decided to become a stay-at-home writer. He has been awarded honorary doctorates by universities such as the University of Mysore, Delhi University, and the University of Leeds. Narayan was awarded several times through the course of his literary career, some significant awards being the Sahitya Akademi Award, the AC Benson Medal, the Padma Vibhushan, and the Padma Bhushan. Narayan passed away on 13th May 2001, in Chennai.

I consider Narayan sir as the greatest Indian writer. His settings and themes with rural and suburb localities are quite easy to comprehend and they feel home. Reader need not imagine things, he/she can just feel it. I had a great difficulty locating this book, thanks to flipkart, I got it.

Book is a easy read and all the motifs and themes are the recurrent ones in his works, but characters that are encountered are unsterotypical compared to his other works,with the likes of printer, shop ke...
READ MORE

distinctive work by a great writer. His storytelling skills are awesome. Laxmans sketches are highlight of the book. Only contains the title story, unlike the high-priced penguin edition. Being a poor reader, i completed it in a day. Think and buy!
READ MORE

Happy that I got a very good book for my son.
READ MORE

Language is simple ,the story just goes on like that, nothing amazing .
READ MORE