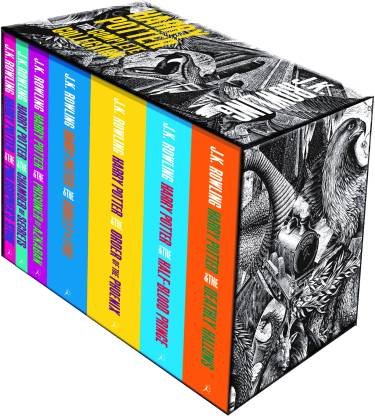 J. K. Rowling's Harry Potter series was a book-selling phenomenon. The story of a boy wizard, orphaned by the deeds of a dark wizard, and his friends as they find themselves pitted repeatedly against evil.

The Summary of the Book

Harry Potter is not an ordinary child. Orphaned at childhood, he has heard from his aunt and uncle that his good-for-nothing parents died in a car crash. Bullied by his cousin Dudley, Harry believes that his life can never improve. The arrival of a half-giant at his doorstep on his eleventh birthday foreshadows his true identity. He learns that he is a wizard, and that he is invited to the greatest institute of magical learning ever: The Hogwarts School of Witchcraft and Wizardry. Once in, he discovers that to the Wizarding world, his name is legend for defeating He Who Must Not Be Named. The series follows Harry Potter and his friends through seven years at the school, where he learns the values of friendship, courage, truth and, above all, love.

Joanne Rowling is an English writer. She achieved cult-status with seven Harry Potter books, The Tales of Beedle The Bard, Fantastic Beasts and Where To Find Them and Quidditch Through The Ages. She has also written two murder mystery novels under the pseudonym of Robert Galbraith.

Jo completed her B.A. in French and Classics at the University of Exeter. She was awarded the title of Officer of the Most Excellent Order of the British Empire for her contributions to charity and literature.

I shall limit this review to the quality of the box set (since most people already know the story of Harry Potter or can easily find it elsewhere).

The highlight of this product is the absolutely beautiful artwork (by Andrew Davidson) on the box and the individual book covers. The covers are lovely to look at.

The slipcase for this set is made from adequately hard card material. The books fit into the slipcase snugly; while this makes the set look good on the shelf, it also makes it difficu...
READ MORE

I bought this box set at an unbelivable price of just Rs 1399 (from the Deal of Day section). Also got it delivered the next day thanks to Flipkart First. Packaging was great as usual and the box set came with 7 bookmarks for each book (Flipkart improved on it, in my previous box set purchases only one was supplied). Harry Potter series is awesome and enthralling as usual. 5 stars both to publisher and Flipkart for this product. Good buy if you love books and HP franchise or you are planning ...
READ MORE

WONDERFUL GIFT TO MY SISTER

first i would like to thanks flipkart for the best price on the best product.
i gifted to my sister.i brought on 8/9/10 when der is 55%0ff on books running over site for few hours,n finally got it for 1632/-n coming to shipment..as usual flipkart shipped on the day i booked n recivd the next day itself..once again thanq very much flipkart...seller is WSretail the most trusted seller.i always buy from that seller only.
READ MORE

Love you flipkart. No one else can give offers like this. Glad I got this on Big Billion day. Five stars for flipkart and Rowling's extraordinary work.

Paper quality and binding seems to be average. Font selection and spacing between lines are excellent which makes reading very comfortable. Really liked the artwork.

This is the simplest version of HP boxset that is available.But the quality of the pages is good, the print is neat and fine and the boxset came well protected. Worth your money if you are an avid HP fan, want the read the books over and over!
READ MORE

Why I am shockingly surprised because
1. Flipkart delivered this set on my doorstep within 16hr. I placed my order at 5pm in the evening and it’s on my doorstep at 9:16am in the morning.
2. No delivery charges. I mean who doesn't like products with free home delivery.
3. All 7 books, the whole series in just rupees 1399. Isn't it amazing?
I think it’s a lucky day for me.

A MUST FOR ALL HARRY POTTER FANS!!!

I ordered it from flipkart and got it after four days...i must say,flipkart is extremely fast.This collection of books is a must for all Harry Potter Fans..this collection is cheaper than the other collection of Harry potter books on flipkart.i read and finished all the books and found it quite interesting,i dont want to spoil the fun for you.i recommend this collection to all.
READ MORE

The product contains all 7 books neatly packaged in a cardboard case.
The case is quite sturdy and books were in good condition.
On the whole, a must buy for all book lovers and HP lovers.
READ MORE

Perfect Gift for some one who loved Harry Potter

I'm not a Harry Potter fan but I have ordered this book set for a huge fan of Harry Potter. From her point of view it's awesome and she's loving it.
Special thanks to Flipkart for it's excellent services...
READ MORE

This book is extraordinary from a very great and exceptional author.Harry potter is a must in your bookshelf.An awesome cover and a great collection.
Thank you flip kart!!!!
READ MORE