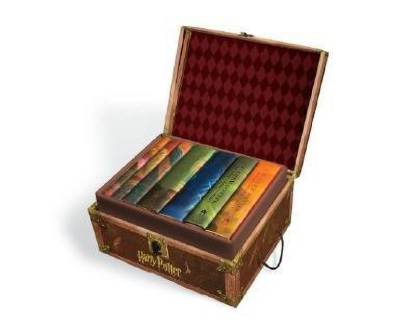 Harry Potter Boxset Books 1-7 is a collector’s edition package of the complete set of Harry Potter books written by J. K. Rowling. The set comes in a wonderfully designed box and stickers to go with it. The books are hardcover publications.

The Harry Potter books are a series of seven fantasy books beginning with Harry Potter And The Philosopher’s Stone, in which the protagonist, Harry Potter, is introduced as a boy who lives in his uncle’s house, after his parents are killed. He is born with a talent for wizardry, which he is completely unaware of till his eleventh birthday. He lives a miserable life with his cousin Dudley, his uncle Vernon, and his stern aunt Petunia. As the story progresses, he receives a letter from a school for wizards and witches, named Hogwarts, asking him to enroll. His entire life turns around, when he finds out that he is actually a part of an entirely different world and that he does not have to go back to living with the muggles anymore.

Though liked by most people at school, Harry encounters people who seem to hate him for no reason, like Draco Malfoy and Professor Severus Snape, both from the house, Slytherin.

Harry also has to deal with cruel treatment at the hands of the Ministry of Magic in Harry Potter And The Order Of The Phoenix. The sixth book introduces a dubious character called the Half Blood Prince and witnesses the death of one of the main characters. The seventh and the last installment in the series, Harry Potter And The Deathly Hallows, depicts a war between the forces of good and evil. Will Harry and his friends emerge triumphant?

Harry Potter Boxset Books 1-7 is a fantastic collector’s item for fans, and a treat for those who receive this as a gift.

J. K. Rowling is a British author who has written a number of bestselling books, her most popular venture being the Harry Potter series.

She has also authored The Casual Vacancy, The Tales Of Beedle The Bard, Fantastic Beasts and Where To Find Them, and The Cuckoo’s Calling.

Rowling’s books have won numerous awards and have sold over 400 million copies worldwide. Her works have been translated into more than 65 languages. J. K. Rowling is also a noted philanthropist. She was named TIME’s runner up for its Person Of The Year award in 2007.

This particular box set is the best Harry Potter set available on the market. It has a very attractive and neat cardboard box with a latch. All the 7 books are in hardcover with excellent paper quality. There is also a nice sticker collection with this set. This set is a must have for any hardcore Harry Potter fan.

The price of this box set is the best at Flipkart compared to other dealers, and the packaging by Flipkart is really excellent. I received the package in just 3 days, in excellent...
READ MORE

dis is d best harry potter set dat any hardcore harry potter must own. . cardboard box wid all 7 books neatly packed n d box has a lock system. . . over all great work worth evry penny. . . n d price at flipkart is better dn most other places as it offers good discount. . . d flipkart packin is appreciable, vry neat though der was a little delay in delivery (it takes almost 15-20 days in delivery). . . love dis series n evry child must read it. . . their childhood is incomplete widout dese bo...
READ MORE

This is the box set for the US Hardcover Editions of Harry Potter. I personally would not recommend this set for casual Harry Potter readers, nor for people just starting out. No, this set is perhaps made for those HARD-CORE Harry Potter fans! Still it is a beautiful collection, with all 7 of the phenomenal books, as well as collectible stickers! Strongly recommended for long-time HP fans! A perfect upgrade to your existing set!
READ MORE

Ah The world of Harry Potter gets better each time yet the same at all times!! I know does not make much sense at first, but my fellow potter heads will understand what I am saying and from where it coming i.e. of course from the heart.
Now coming to the actual review: The Harry Potter series of course needs no introduction nor does it mandate a review, so I will be limiting my review to this particular box-set only. Now, this box-set is absolutely beautiful, and almost transports you to Hogw...
READ MORE

Being a huge fan of the Harry Potter series and having read them multiple times, I wanted to own a hardcover edition that I will cherish all my life. Somehow, none of the others I checked fit what I was looking for. This one is perfect. It comes in a replica of the trunk that Harry carries to Hogwarts. And has beautiful cover art on all the books.

This is the best gift I could have asked, for my 30th Birthday :)
READ MORE

I had dreamed for such a compact Harry Potter collection for a long time. And finally I got it. Those 7 amazing books in a treasure trunk like box with special stickers....Any Harry Potter fan will like it. The pages are good with clear big print and Mary Grandpre's illustrations. It would be a perfect choice if you are looking for a perfect Harry Potter book set.
READ MORE

It was perhaps for this particular edition of HP I had been waiting since I had got acquainted with Mr. Potter, in my late childhood. Probably any of the Potter fans will be agreeing with me on this issue, if they get this volume in their hands.

I shall not say anything about the texts, fonts, paper quality, illustrations, picture quality, cover jacket etc., as those have already been beautifully portrayed by my fellow reviewers. But I shall be more than happy to relate about that blissful e...
READ MORE

It is a beautiful piece for collectors... Lovely packing, awesome delivery and looks so beautiful as part of your Harry Potter memorabilia collection!!!! Must buy for serious potterheads!!!!
READ MORE

This Product is one of the best things I ever spent my money on. It is absolutely beautiful. it comes in a box that is a replica of Harry's trunk. It even has a place for you to write your name. The box, though has a wooden look, is in fact, cardboard. The books are a treat in themselves. The page quality is superb. The binding is great. And to all the book sniffers out there, an added bonus is that it smells heavenly. I say it's a must have for all the Potterheads.
READ MORE

The only thing I'm disappointed about is the missing stickers in this set. Rest is just perfect.
READ MORE