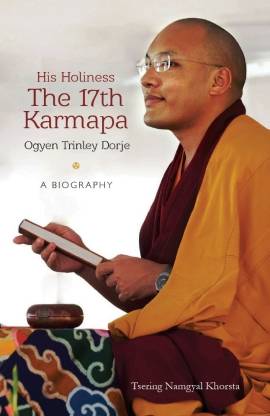 A fascinating and riveting life sketch – compact but comprehensive - one of the most respected spiritual leaders of our times, which also throws on the various facets of Tibetan Buddhism, now spread far and wide across the world...

Born on 26th June 1985 in eastern Tibet to nomadic parents, Ogyen Trinley Dorje was identified in 1992 as the reincarnation of the 16th Karmapa. He became the first Tibetan reincarnation to be recognized by both the Dalai Lama and he Beijing Government. The 15- year-old monk made headlines when he fled from Tibet in January 2000 to escape the repressive Chinese regime. Currently based near Dharamshala (in Himachal Pradesh, India), the seventeenth Karmapa is widely seen as an important spiritual leader of the twenty-first century. Over the past decade he has attained the status of a deeply revered guru apart from emerging as an excellent artist (with a meticulous eye for details), an accomplished playwright, an impressive orator (who peppers his talks with humour) and a dedicated activist for the conservation and protection of the environment.

The Karmapa stands our as an extraordinary young man, full of charisma and intelligence despite some controversies that have dogged him. Yet few know who he really is and what he believes in. What are his teachings and what is his vision for the world? How is he restoring his 900-year-old Tibetan Buddhist institution of which he is the head? In a unique mixture of biography, travelogue and reportage, the author brings alive the significant events in the life of the Karmapa, who is grappling with immense challenges to modernize Tibetan Buddhism and spirituality, while keeping its essence alive. A timely volume that is highly relevant today given the worldwide attention on the developments in Tibet.

About the Author
Tsering Namgyal have worked as a journalist, writer and editor for over 15 years, which makes him most widely published journalist of Tibetan origin. His articles have appeared in the Asian Wall Street Journal, Asia Times, Himal South Asia, Harvard Asia Pacific Review, Far Eastern Economic Review, amongst others. He hold an MA in Mass Communication and history from University of Minnesota and another MA in Journalism from University of Iowa, where he also studied creative writing. In 2007, he was awarded the Dorothy Mueller Writing Scholarship from University of Iowa. He is currently based in New York and works at a non-profit organization dedicated to education, healthcare and cultural preservation of the Tibetan refugees.