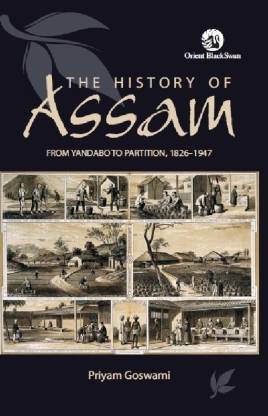 The History of Assam from Yandabo to Partition (English, Paperback, Goswami Priyam)

The History of Assam from Yandabo to Partition  (English, Paperback, Goswami Priyam)

A state whose beginnings were rooted in a one-sided battle, Assam's story is one that reaches back from 1826 to the partition of India. Priyam Goswami takes readers through the state's past and explains the present scenario in The History of Assam: From Yandabo to Partition.

Two years after a war broke out, the Burmese kingdom was faced with a treaty that sealed its fate in the British Empire. Cede large parts of the nation over to the East India Company, and Assam was a part of that list. Assam's beginnings are best told as a story of the downfall of the Ahoms, a decline that was the mirror-image of the rise of the British Empire in that area. Now a land renown for its tea, green expanses and serenity, the land that became Assam struggled throughout the British rule to wrest free of their grasp. This book tells the story of how the East India Company dug its heels into the land and expanded across the valley of the Brahmaputra. Dr. Goswami explains that the Empire was never satisfied in its growth and kept eating away at the Cachar and the Central Hills in a nearly gluttonous growth. He speaks of the tribes of Assam and how they have emerged out of the oppression and how Independence affected them. Nationalism was a difficult issue in pre-Independence Assam, but when the issue finally settled in, the state joined the rest of the country in a full-fledged battle that drove the British out of the country and out of their land. Assam's story, as Dr. Goswami proves time and again, is a poetic tale of the fall of many dwindling tribes and the rise of political consciousness that has brought them together in the decades that followed the Partition.

Priyam Goswami is an Indian historian and former Professor of History at the Gauhati University. Dr. Goswami has also written: Indigenous Industries Of Assam : Retrospect And Prospect and Assam In The Nineteenth Century.

This book is easy to understand. It helps in understanding the 19th and 20th century Assam as well as North East India. Socio-economic aspects are pretty much well covered. However, the freedom struggle is not covered extensively.
READ MORE

This book give historical track of the Assam and the colonial struggle that was played by the people. Thanks for adding comprehensive book for the researchers, students, historians and those who want to know India's North East settings.
READ MORE