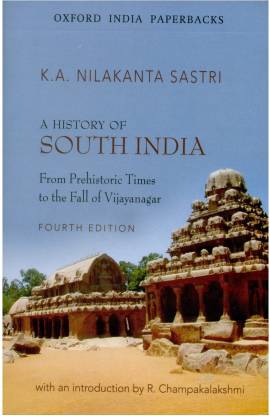 Sold Out
This item is currently out of stock
Author
Sastri K. A. Nilakanta
Read More
Highlights

A History Of South India 4th Edition is an interesting narrative about the history of the Indian subcontinent southwards of the Deccan plateau.

First published in 1955, A History Of South India 4th Edition is a compelling historical account of South India, starting from the prehistoric times to the fall of Vijayanagar circa mid-seventeenth century. The geographical region discussed in this book, in addition to what is considered a part of South India, includes parts of Madhya Pradesh, Odisha, Maharashtra, and Goa.

In addition to the origins of Dravidian people and their culture, the author has also discussed legends related to South India like those of sage Agastya and Parasurama. The book traces the historical background of the region by talking about various dynasties like the Cholas, Pandyas, Mauryas, and Gangas that ruled different parts of South India during different times. Trade, art, literature, philosophy, and religion have also been emphasised upon in the later parts of the text.

The topics covered in this book include the age of the Mauryan empire, the age of the four empires, the empire of Vijayanagar, the Satavahanas and their successors, Aryanization, art and architecture, and social and economic conditions.

This fourth edition begins with a Prologue by Rajan Gurukkal, an eminent Indian historian, followed by an Introduction by R. Champakalakshmi, a reputed history professor.

A History Of South India 4th Edition contains information that is replete with illustrations, genealogical charts, and maps.

Born on 12 August, 1892, K. A. Nilakanta Sastri is considered one of the most prolific South Indian/ Dravidian historians and authors.
Apart from this book, Nilakanta Sastri has also authored History of Sri Vijaya, The Cholas, The Culture And History Of The Tamils, South Indian Influences In The Far East, Sangam Literature: Its Cults And Cultures, Cultural Contacts Between Aryans And Dravidians, and Age Of The Nandas And Mauryas.

He received his college education at the Madras Christian College and married Lakshmi Narasammal. Professor Sastri died on 15 June, 1975. He was awarded the Padma Bhushan in 1957.

R. Champakalakshmi is the former General President of the Indian History Congress. She also served as a Professor of History at the Jawaharlal Nehru University, New Delhi.

Quite well explained book, with good descriptions and all. Good for them who want to get a quick review about South India and its rich history.
READ MORE

This book is really the encyclopedia of South Indian history. Loved it.
READ MORE

Nice book for people want to know more about South Indian history in some detail, much ignored political incidents during ancient and Mughal Times are easily embossed , which combined with mainstream history portrays the the complete picture of that time.

Language is lucid which makes the book seems much like a storybook
Details and facts keeps the text straightforward and unbiased with no personal opinion involved.
READ MORE

A good book about the history of South India
READ MORE

0
0
Permalink
Report Abuse
+
All 15 reviews
Questions and Answers
Q:is this book contains about political history if tamil nadu
A:Yes it does
Anonymous
Certified Buyer
1
0
Report Abuse
Q:IS THIS BOOK USEFUL FOR UPSC EXAMINATION?
A:Yes. It will be helpful.
SEEK AND FIND
Flipkart Seller
0
0
Report Abuse
Didn't get the right answer you were looking for
Safe and Secure Payments.Easy returns.100% Authentic products.
Back to top