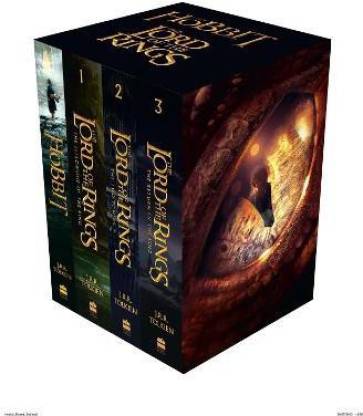 The Hobbit and The Lord of the Rings (English, Mixed media product, Tolkien J. R. R.)

The Hobbit and The Lord of the Rings  (English, Mixed media product, Tolkien J. R. R.)

In a hole in the ground, there lived a hobbit. These lines began a journey into J.R.R. Tolkien's fantastic world of Middle-Earth, a journey of magic, friendship, danger and, above all, adventure.

Bilbo Baggins was quite comfortable living in his hole; not a worm infested hole, but a hobbit-hole and that means all the comforts of home. Hobbits are a quiet folk, they love songs and blowing smoke rings in the Shire, given to normal lives and a disdain for adventure. Bilbo was quite comfortable, thank you very much, and he liked his life as it was. Of course what Hobbits like doesn't really matter to the machinations of Gandalf the Grey, a mighty wizard infamous for meddling where he was not wanted. So when Gandalf shows up at Bilbo's door, claiming that he wants to take him on an adventure with thirteen dwarves, Bilbo is sure that he wants no part of it. However, Gandalf is not someone who takes no for an answer.

2. The Lord of the Rings

Long ago, the Elves of Eregion forged the Great Rings of Power. In them, they invested their knowledge and skill. They were betrayed, however, by Sauron who forged the master ring, the One Ring to Rule Them All. The Elves and Men of Middle-Earth rose in rebellion against his power and severed the ring from his hand. In time, the One Ring was lost and mankind forgot that not all was yet safe from Sauron's power.

In the Shire, Bilbo Baggins makes plans to go on a journey. He calls for a party, and his nephew Frodo is sad out of the knowledge that Bilbo will be gone. On Bilbo's departure, Frodo finds that his uncle has left him a curious ring as part of his inheritance. Unknown to him, the ring is not something to take lightly, for in Mordor, a shadow has awoken long since thought destroyed. And the ring continues to seek its master: The Lord of the Rings.

John Ronald Reuel Tolkien was a best-selling English author. He is considered the father of the fantasy genre and is also known for The Silmarillion and Unfinished Tales of Numenor and Middle-Earth.

Professor Tolkien studied English Language and Literature at Exeter College, Oxford. He loved creating languages, and his work on Middle-Earth has since elevated to cult-status after the release of the Oscar Winning movie trilogy directed by Peter Jackson.

If this is the first time you are reading these books...This boxset is a great way to go. The print quality is great....not like some of the cheap print we see in India....Maps are small but present in all the books...binding-wise...i guess there will be some creases after freequent reading. All in all, a great purchase
READ MORE

This product is Rubber bound and the quality of the book is awesome. I hope it last longer than most of the hard bounded texts. Delivery was also good.
READ MORE

The books are fantastic. This.is the 50th anniversary edition of the books. I will surely recommend everyone to dive into the LOTR universe. It's mesmerising.
READ MORE

They are literally pocket sized..I haven't read them yet and hopefully nothing will have been cut from the books..
Nice leather cases..it's a nice way to gift your friends
READ MORE

It's a really good Book.I loved it so much and it's a bit of tough English so I believe it'll be easy if you watch the movie first.
READ MORE

Books were in perfect condition. Print was also good. Steal deal in this price.
READ MORE

Great deal
Bought it for rs917
But the size of book is smaller than expected.
READ MORE

Must read. For all age groups!
READ MORE