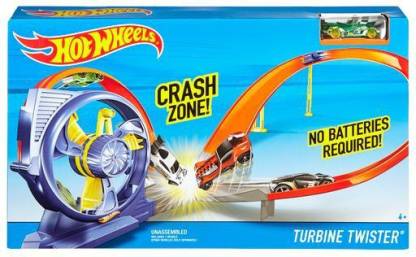 Your little one can now add to his Hot Wheels race track collection with this Turbine Twister set from Hot Wheels. The motor mayhem of this set is immense, especially when the cars go shooting out onto the figure eight-like track.

Instead of the usual battery-powered set, the cars in this set are launched using a wind-up booster that sends cars shooting around a figure eight-like track which has a bank and a loop.

You can also modify the track in such a way that multiple cars will go jumping off the tracks and crashing into one another.

You can also make the car jump the track so that it goes on for longer. The launcher, which is manually boosted, can send the car around over and over again, up to 30 times.

Nice to be gifted to young ones

This gift enjoyed. Nice product, Boys like it .
I recommend it for all young boys. Car racing and diving them throug htracks is awesome experience.
READ MORE

1
0
Permalink
Report Abuse
5
My 3 year old kid enjoys it so much!
It's simple to assemble and easy to use. Just crank the spring and push a car in the turbine and watch the car do rounds.
You can crank it up to 10 rounds which gives around 25 rounds of car action.
Obviously the price is a lot but it's no Chinese toy.
By it's look and feel I believe it's going to last long.
An awesome hotwheels car is included.
READ MORE

My son really loved this one. We had a couple of more cars of our own of course, but even with one car that came with the pack, it was pretty good. Maybe not worth the original price of Rs. 1999 but definitely worth-it with the discounts from Flipkart.
READ MORE

Product delivered on time, Quality product, Received with good packaging, I am new to this model so it took me 10 minutes to assembled this rest everything is stupendo fantabulous fantastic.
READ MORE

Kid is not using at all

i gave this to my nephew and he preferred the 150 rs monster truck better than this.

it gets boring after playing for 5 min...
READ MORE

I am posting this review after a couple of months of usage. My child loves this set. The wind-up turbine is easy to 'power up' with little hands yet strong on the car, will push the car way more than a dozen times / a minute or a little over. Adding another light car from another set made it more fun. I think there need be (unless I missed these) some instructions on how to clean the track and the car; dirt causes stickiness which slows the car. The turbine will get some fatigue after a coupl...
READ MORE

I got this toy and since i had watched its video on youtube...i really wanted to get one for my kid. I got a new piece (i think) but got really disappointed when i tried to move the wheel...the spring was not working properly (the trigger)...and i had to keep it back in its box...i want to return it since i wasted my money on a DEFECTED product...i am happy if they can just replace it for a product in working condtion bcz i really wanted this. actually my product is not broken but definitely ...
READ MORE

I frankly ordered it for the brand name and low price point, of course knowing that I would get genuine products on Flipkart. I was a little swayed by the comments from other users, which said the product was not working fine for quite few. I mailed flipkart team to ensure that I do not face the same issue. Although they assured with all the necessary concerns, but I was not sure till I got the product. The product got a LITTLE delayed and "lo and behold", a credit refund was issued to me for...
READ MORE