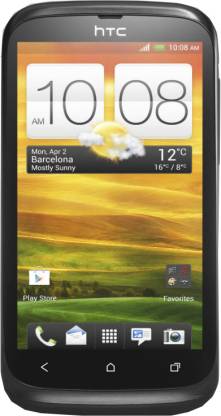 HTC brings you a mid-ranged smartphone which packs a lot of power within a diminutive body. The HTC Desire V is a bar shaped mobile which is run on the futuristic and smart Android v4.0 (Ice Cream Sandwich) OS backed up by a mighty 1 GHz Cortex-A5 processor. The device contains an adequate 512 MB RAM to ensure the smooth running of multiple apps on the phone. The HTC Desire V has a dual SIM (GSM + GSM) functionality for those users who travel a lot and use more than one SIM card.

The display is a 4-inch capacitive touchscreen which is easy to use and quite responsive. The phone uses an HTC sense 4.0 User Interface which brings with it a number of tools and features to simplify the user’s experience.

The camera on this HTC phone is a powerful 5 megapixel device which comes with an LED flash for clicking pictures in low light. It features tools like Autofocus and Geo-tagging which makes it easier to use. Additionally, the camera also has video shooting capability to complement its power.

This HTC Desire V is a good-looking smartphone. The device’s large screen and slim frame make it a highly desirable buy. The dimensions of the phone are 62.3 x 118.5 x 9.32 mm. With a thickness of 9.32 mm, it is one of the slimmest smartphones available in the market. The HTC Desire V weighs in at 114 g which makes it relatively light as well.

The device contains an inbuilt Proximity sensor as well as an Ambient Light sensor. These functions intelligently help to conserve battery and enhance the usability of the phone.

The device contains an ample 4 GB of internal memory. Additionally, it contains an expandable memory slot which can push the memory to up to 32 GB for your images, videos and music collection. The phone is backed up by an adequate 1650 mAh Li-Ion battery which provides an optimum battery life.

This HTC device is more than capable of keeping the user well connected under most circumstances. The phone is GPRS and EDGE technology capable, which will keep the user connected over the 2G network. For faster browsing while on the move, the phone is also 3G capable. The device has a WiFi capability for connecting to the internet over a wireless network as well as a WiFi hotspot tethering functionality. The user can also transfer files via Bluetooth or a micro USB port. The HTC Desire V is a good navigating device as it supports A-GPS technology through Google Maps

The phone also has interesting entertainment features in the form of a music player, video player and an FM radio. The music experience has been enhanced for the user with the inbuilt Beats Audio functionality.

If Looks Could Kill.. I would be Dead by Now..

I have read the reviews that people have written about this phone. And I am sure those reviews have all been based on specs / Picturs/Videos available online. I would Suggest everyone who has written those reviews to go and check this phone out. I bought this today. And Oh My Oh My Oh My.. This is a STUNNER. The moment the shopkeeper pulled it out of the box (The White One) I fell in love. And Believe me, It was love at first sight. My Breathing got heavier.. and Damn !! This looked BEAUTIFUL...
READ MORE

My need for a top end dual sim phone with Android 4 was fulfilled by HTC Desire V. Stunning looks, awesome curves, superlative performance are just few words that can describe this phone...From the moment I received this pack, I just couldn't put it aside for a minute, till I was chided by my kids....
READ MORE

Simply Awesome with extra ordinary features.
Very fine camera, Best sound quality, might be volume is not so much .

Developers no longer concentrate on older versions, all they do is the latest. For example,chrome web browser is available only on ICS, I use it on my desktop and I love it.

It's not just ICS, but sense 4, SLCD2 screen, beats audio, powerful cam, and top-notch build quality. Yes, I am a bit skeptical about 'beats audio' quality, but that's okay.

A nice one by hTC this time..

I ordered this phone from flipkart itself, it came after long 12 days..!
Talking about the phone, you can see specifications on any site, but it is the review that matters. I own this phone, and believe me, its an awesome phone, by looks, performance, and many more.. 'hTC sense' really makes a sense..!
I chose this for its dual sim feature, it is htc's first dual sim phone. Camera captures good pics, even in low light conditions. Display is bright and clear. RAM is 512 MB and processor 1GHz, ...
READ MORE

At 21K, this is not what you would hope to get...
unless you desperately want an ICS installed DUAL SIM smartphone, there is absolutely no sense in buying this for such a price... go for one v which definitely looks better and has similar but better performing specs...
or go for xperia sola which is with dual core.... or pay 3K more and get xperia p which is far far better than any phone in less than 25K bracket!!
READ MORE

I got the phone from open market and using it for past ten days.Previously had Apple iphone and after using HTC,never missed the Apple.The software is excellent to work.
Pros:
Very beatiful to look at and very handy in pocket and to operate
Camera quality and video capturing is excellent
Voice quality is excellent
Net surfing is very fast
Battery backup is excellent,about 1.5 days with normal use
GPS works excellent
Cons:
Only one sim operational at one time ,be it calling or net use
Miising ...
READ MORE

For a phone at 22K it is under specced. It should have improved upon HTC One V. Desirable should have been 8GB internal memory, rear camera with HD video with BSI Sensor and dedicated imaging chip (similar to One V), atleast a front VGA camera, super LCD display with corning gorilla glass, document editor, hot swappable SIM 2 with 3G support. One wonders why dual SIM phone are not coming in with latest high end specs.
READ MORE

product. Readers are interested in the pros and the cons of the product.

Be yourself, be informative
Let your personality shine through, but it's equally important to provide facts to back up your opinion.

Get your facts right!
Nothing is worse than inaccurate information. If you're not really sure, research always helps.

Stay concise
Be creative but also remember to stay on topic. A catchy title will always get attention!

A good phone but overpriced

Cons
No HD video recording
Old config - 1GHz Processor + Adreno 200 + 512mb RAM .This has grown too old.Samsung Galaxy S Advance provides you a slightly better config for about 3k less WITH secondary camera for Video calling guys.I know this config runs temple run smoothly but if you can get a better config or same config for a lesser pri...
READ MORE

1
0
Permalink
Report Abuse
+
All 79 reviews
Have doubts regarding this product?
Safe and Secure Payments.Easy returns.100% Authentic products.
You might be interested in