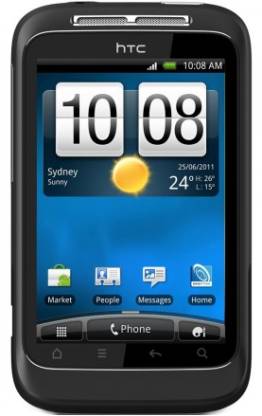 Description
The HTC Wildfire S succeeds the previously launched HTC Wildfire. However, with Wildfire S, HTC have plugged the loopholes pointed at its predecessor like an enhanced screen resolution and processor. The Wildfire S is a full touch mobile phone that comes with the latest version of the Android operating system, the Gingerbread (Android 2.3). This HTC smartphone is powered by a 600 MHz Qualcomm Scorpion processor and has 512 MB of RAM onboard.

The HTC Wildfire S sports a 3.2-inch TFT screen with resolution of 480 x 320 pixels, which is a step ahead from the measly 240 x 320 pixel resolution of the Wildfire. Like other HTC devices, the Wildfire S is also adorned with the proprietary Sense UI that brings in new features like improved settings in the notification bar and updating of your app drawer as per items downloaded. Also Friend Stream feature in the UI brings all the updates of your friends on social networks such as Facebook, Twitter or Flickr together in one screen.

A 5 megapixel camera is loaded into the Wildfire S with auto focus and LED flash capabilities, allowing images shot in low light to be clearer and less grainy. You can also record videos through the phone camera at 24 fps.

This Android device has a metallic finish and small frame making it fit snugly into your palms or pockets. Weighing 105 g, the TFT capacitive touchscreen of the Wildfire S supports 256 K colors and features the regular sensors such as accelerometer, proximity sensor and ambient light sensor.

The HTC handset ships with internal memory of 512 MB. The Wildfire S is compatible with microSD 2.0 card, using which the memory of the phone can be expanded up to 32 GB. The battery used in the HTC Wildfire S is a standard 1230 mAh Li-Ion that gives talk time of up to 4 hours and standby time of 120 hours.

Users can access Internet on the Wildfire S through GPRS, 3G, Wi-Fi and EDGE. You can share your Internet connectivity with other devices, thanks to the Wi-Fi hotspot feature present in the phone. Connectivity options include Bluetooth, USB and a 3.5 mm audio jack. Location based services of the HTC mobile phone are A-GPS which ensures you are always on track. The handset has access to the Android Market, from where you can download apps of your choice.
Read More
Specifications
General
Display Features
Os & Processor Features
Memory & Storage Features
Camera Features
Connectivity Features
Other Details
Multimedia Features
Battery & Power Features
Dimensions
Warranty
Have doubts regarding this product?
Safe and Secure Payments.Easy returns.100% Authentic products.
You might be interested in