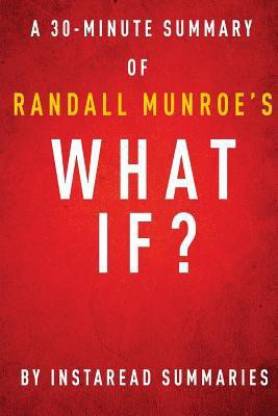 What If? by Randall Munroe - A 30-Minute Instaread Summary  (English, Paperback, Summaries Instaread)

- Overview of the entire book
- Introduction to the important people in the book
- Summary and analysis of all the chapters in the book
- Key Takeaways of the book
- A Reader's Perspective
Preview of this summary: Chapters 1-4

Global Windstorm. If the earth stopped spinning, but the air kept moving, supersonic winds would develop everywhere except near the poles. Half the earth would freeze while the other half would burn up. People would survive only in a few places, such as research stations at the South Pole. Cold water would churn up from the ocean depths, creating global cooling and tsunamis. Eventually, however, the moon, still rotating, would start moving toward Earth. The tidal energy of the moon would tug on Earth and start it spinning again.

Relativistic Baseball. A baseball traveling at ninety percent of light speed would create a thermonuclear explosion as it came in contact with the air. Batter, catcher, ballpark and everything nearby would be destroyed. It would also happen so fast that everything would remain stationary. An MIT scientist who also simulated this, however, told Munroe that his result could not be duplicated.

Spent Fuel Pool. Swimming in a pool of spent nuclear reactor fuel would not be fatal. A swimmer who does not dive down and touch a spent fuel rod would be exposed to less radiation than a person normally gets walking around. The water temperature would be slightly less than that of a hot tub. Workers actually swim in these pools to service them...