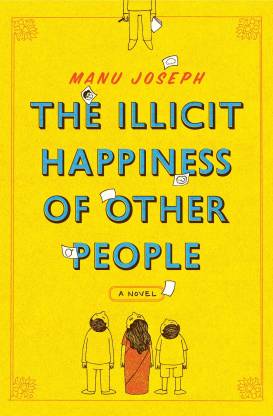 The Illicit Happiness of Other People is a contemporary novel set in Madras in 1990.

When seventeen year old Unni Chacko makes a terrible decision, there is only one clue which can explain why. His anarchist father Ousep finds a comic strip Unni has drawn and begins looking into the extraordinary life of his son. Ousep is a journalist and failed novelist who has few likeable traits. He returns home late after drinking at a pub, disturbing the neighbours as he does so. His wife has had enough of his antics. Having suffered long enough, she plots to kill him. A black comedy revolving around the lives of a failed writer who has found purpose, a young cartoonist’s dangerous representation of truth, the machinations of a brilliant housewife and the innocent love of a 12 year old boy for a beautiful girl, this story will enchant readers and teases them with its mystery and philosophy.

Manu Joseph is an Indian journalist and writer, currently based in Delhi. His previous book is entitled Serious Men.

As Manu Joseph attested 'THE ILLICIT HAPPINESS OF OTHER PEOPLE' gives the reader a melancholy of pointlessness. his creation of character, ambience, conversation all are jst brilliant. we could see it right from his very first novel 'Serious Men'. Humorous way telling the story keep readers amused. I wonder how he managed to do that!

Im his new novel too characters are much similar to the dayto day life. Illustration of 1980's Madras, people living there, their hopes, dreams all are superb. ...
READ MORE

The story gave me the chills

The story is pretty gripping and it stays with you for a long time. Such is the degree of enchantment that you won't be able to get up until you finish the story. Manu Joseph puts out beautifully the mundane-ness of middle class educated people whose primary aim in life is to crack JEE and then go to the US and then get married at 28. The end of the story is amazing. It's a dark comedy as good in quality as Serious Men.
READ MORE

Since i have not yet read Serious Men( the author debut novel which won literary awards galore) i cannot compare between his two works.......But TIHOOP beautifully describes the melancholy dreary life of the Chackos in the most delectable manner. You do not pity the characters instead u realize that life is at many points a farce. Joseph brilliantly parodies the Madras mindset of churning their sons into IIT products who will eventually migrate to American suburbs..........He does not spare t...
READ MORE

My first read of Manu Joseph. Was quite skeptical before taking up this book, but this was recommended to me by a friend. After reading a few pages, I know now that I am gonna enjoy this read to the most through the course of reading this book.
Way to go Mr. Joseph, the way he has blended comedy through words is incredibly hirarious. I keep laughing not just while reading the book but also when I just remember those comedy embalmed punches while am at work or even in the bath room !!
A MUST B...
READ MORE

One of the best books I read so far. Awesome mix of suspense, philosophy, psychology, varied adolescent behaviors n dark humor. I just loved it. Buy it without a doubt. It may feel like boring in da beginning but if u go on, you will love it.

It introduced me to the world of philosophy and changed the way I look at the world. Kudos to flipkart as I got this hardcover for 60% discount much less than the paperback price.
READ MORE

every line was interesting .i read this book in two strokes as it was damn interesting. i love this kind of books which are based on life and it also has some philosophical lines which trigers our mind to think like still i dont know what truth actually is.Those who like must go for his previous book SERIOUS MAN.
READ MORE

A Mindblowing Ride into Darkness

This is the first book by Manu Joseph that I read, and I won't lie, the fact that this book was a runner up for the Hindu Literary Prize 2013 actually shaped my decision about picking this up, as I'm normally somewhat apprehensive about new Indian authors. I was literally blown away by the whole premise of the story..the blurb was enough to entice me, and then the reading experience was pure, abundant pleasure. The prose is crystal clear, not a word out of place, not a thought forcefully brou...
READ MORE

Its definitely a twisted ending, keeps you guessing till the last few pages. I loved the way the author has described the small things of life, the longings in people, the weirdness of the young.. All in all a satisfying red
READ MORE

This Novel is disturbing in many ways it forces you to come out of your cocoon and notice and analyze various issues in a way u have never done before and that itself is the sheer beauty of this book . Go for it if you want to delve into something not mundane!!!
READ MORE