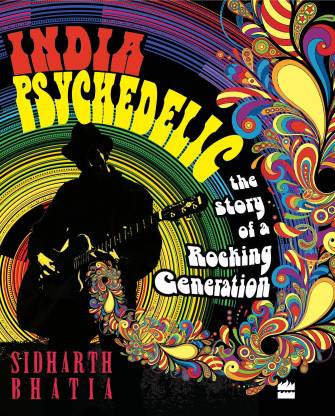 India Psychedelic: The Story of Rocking Generation is the never-before-told narrative of the rock music scene in post-independent India.

In the sixties and seventies India was still in a state of transformation and was trying to evolve in to a self-sufficient nation. The young generation of a recently independent nation was swept off their feet by four young boys from Liverpool. The Beatles were loved by people from all over the world and their influence on rock music and popular culture in that era was immense. In India too, the young and cool were also grooving to their music. The Beatles had a huge impact on the Indians which led to the Indian pop and rock revolution.

According to the author, Sidharth Bhatia, it was not the music that was important, rather the fact that Indians were ready to break away from the conventional culture and assert their own voice. Most youngsters of that era grew their hair, put on their bell bottoms and guitar. It was a journey to self-discovery and attempts to break free from age-old attitudes and values.

Sidharth Bhatia is an Indian author and journalist. He writes columns on current affairs for popular Indian newspapers. He is currently based out of Mumbai.

A reason I bought this book was because I grew up during that time and am more or less of that generation - the psychedelic one. Besides, I also organised concerts and shows with musicians of that ilk, and am quite au fait with the scene, as it were. So Siddharth Bhatia disappoints sorely at one level. On the other hand, I am happy that this niche section of Indian social history has been documented, albeit very scantily. It's the kind of reportage very common in the Sunday supplements of Eng...
READ MORE

Could have been so much more. Repetitive, poorly written and badly edited.

Wish he had tracked down all those Anglo Indian musicians who are abruptly lost to migration.
READ MORE