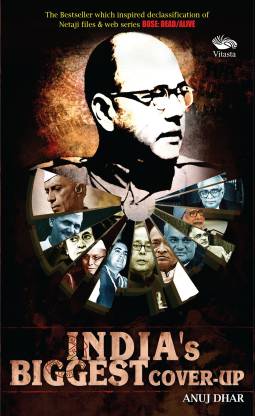 Published in the year 2012, India’s Biggest Cover Up is a book that is set to uncover the hidden mystery behind the death of the renowned freedom fighter from India, Subhash Chandra Bose.

India’s Biggest Cover Up is a sequel to Dhar’s previous book, Back From Dead: Inside The Subhas Bose Mystery, which was released in 2005. Following that, Dhar and his colleagues had begun their research to find out the reason behind Subhash Chandra Bose’s death, and requested extra information from the Ministry of Home Affairs, Indian Prime Minister’s Office, and the Ministry of External Affairs. They also sought information from foreign governments through the Freedom of Information Act and the Right to Information Act.

This book comprises 13 chapters along with six appendices. It also has over 200 photographs, and 90 top-secret documents that provide a whole new perspective on the death of Netaji. Dhar presents the readers with insights into why he believes Pranab Mukherjee played a role in Bose’s mysterious death. Dhar explains that how Mukherjee allegedly flew to Germany, and attempted to bribe Bose’s wife into giving a written approval to take the ashes from Renkoji Temple, Japan, to India as Bose’s ashes.

India’s Biggest Cover Up also provides the readers with an original copy of the document in which the Indian government states that Bose’s death occurred due to a plane crash. It also presents information about former IB Director B. N. Mullik, who lied under oath that the IB had never snooped on Shaulmari baba, who was considered Netaji by many. However, this book comprises certain top secret records of the Intelligence Bureau that Mullik had personally spoken to Jawaharlal Nehru about, concerning certain trivial matters about Shaulmari baba. He also throws light on the treasure of the Indian National Army, which includes diamonds, jewellery, and other valuables that were given by expatriate Indians. There were four men behind the looting, and Jawaharlal Nehru hired one of them even after knowing about his corrupt activities. Dhar explains that it can be regarded as the first scam that took place in Independent India.

This book was greatly appreciated by its readers, and newspapers across the country.

Anuj Dhar is a former journalist, independent researcher, and author.

Apart from this book, Dhar has written Back From Dead: Inside The Subhas Bose Mystery and CIA’s Eye On South Asia.

Dhar was born in a Kashmiri Hindu family, and was brought up in New Delhi. He holds a Master’s degree in Political Science from Delhi University. He began his career by working for Hindustan Times, and then NDTV. During his time at Hindustan Times, Dhar was involved in a research project on the Bose mystery. Even after the project was completed, he still carried out independent research on Bose. He currently serves as the founder trustee of Mission Netaji, which carries out research on the mysterious death of Netaji Subhas Chandra Bose. 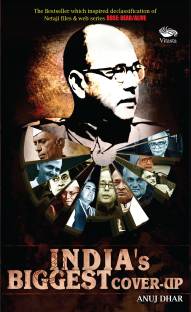 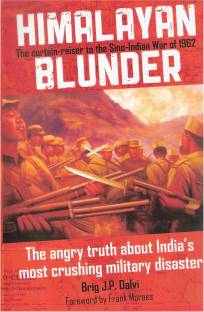 Blowing the lid off the Netaji mystery...

A profile image two inches-by-two in a school textbook. Round-face. Round-rimmed spectacles. Khakhi garrison cap. Looking into the far distance. That is the image our minds invoke on hearing the name Subhas Chandra Bose. An ICS officer in the His Majesty's British Empire turned revolutionary. Twice the president of the grand old party of India - the Indian National Congress. The founder of the Forward Bloc. The civilian who became a general. The first leader of the Azad Hind Government, in ex...
READ MORE

Series of Serious statements in a single book

10 out of 10. Just completed the book.
A Master piece- Surprising & realistic revelations about the Disappearance of Subhash Chandra Bose. Must read for them those who want to know what happened to him after 1945, Answers of all the WHO - WHAT & WHYs related to him.
A flash into the dark past... description of many surprising realities... Yes all with proofs. All time best reference about Netajee. The best book published in last 10 years.

Yes, Leading politicians of India who are related...
READ MORE

The book is an wonder and bears the true fruits of a genuine research backed by passion and love ... literally i couldnt stop reading it ... held aback with surprising revelations coming up in pages and snippets of sercret letters being flashed ... the picture of SOMEONE in a high voltage Conferance in Paris just made me go mad ...finally i wd say, this book is a must read for all and everyone who worships TRUTH...Satyamev Jayte !
READ MORE

For someone who is a Netaji follower this book is treasure trove.... Backed by innumerable documents and facts written by someone who genuinely cares for Netaji... I am sure this just the first book I have read on him and there are many more to come... Eye opener about lot of haloed political figures... Awesome job Anuj...
READ MORE

Must must must read & great book!!!

Hats off to the writer. A superb & appreciable approach & an aggressive effort of the writer to almost solved the mystery of Netajee's dissappearance. The book solves most of the missing information about Netajee after 1945. Huge amount of information, gathered in a systematic way & addresses many political & national issues. well identifies the villians of the game.

The book has the unmatched potential of making a blast in the Indian minds, particularl...
READ MORE

The book charges the soul

The book changed my way of thinking. Now I feel the sacrifice of Netaji was much more than Gandhiji. A real hero. Check the photograph in the last page. I couldn't believe what I am reading. Definitely A HERO & ALL INDIANS have been betrayed Brutally, heartlessly & mercilessly, that is executed by many politicians. Now the issue stands as India's biggest pain, biggest damage & so the BIGGEST COVER UP. The book narrates the circumstances, but it still made me emotional. The damage to India's b...
READ MORE

This is going to be awesome ... I'm so excited to read this book ... I loved the web series and I'm sure this book will cover almost everything which could not be portrayed on the web series ... This book is a question to history n to the government of India to know the truth behind such a cover up and conspiracy ... Subhash Chandra Bose - Netaji is my idol and he deserves a lot more from this nation than what was given to him ... It's him and his army who freed our nation from the British ty...
READ MORE

Salute to the greatest commander...

Arguably the best book ever written about the great leader of our country...uncovering some shocking truths about some famous people doing some infamous things to dilute the doings of a true patriot and worthy son of our motherland.And to satisfy even the sceptics the facts are backed with original documents and top secret letters to provide unparalleled acceptance and prove things beyond an iota of doubt.Seriously some honest research is involved..Thumbs up and a real eye opener...
READ MORE

Gripping to the core. Every page bore the zeal of revelation .... a very distinguished voice from the 'Inner Sanctum' of TRUTH itself. Going through this testament one cannot help getting engrossed within. The sheer effort with which the author undertook the holy mission of digging out the lost and carefully hidden pieces of 'Indian Holy Grail' i.e. 'The BOSE Mystery' for over one and half decades is immeasurable and what it has yielded is really 'invaluable'. Even sparing my feeble stock of ...
READ MORE

An extra-ordinary book that belongs to future ...

It is an extra-ordinary book in many senses - seldom found in modern Indian geo-socio-political space. Even if one is uninitiated on Netaji, his works, life and all the controversies trailing him, this book might change the whole perspective. Because it has never attempted to shape up as a biography of one of the most admired personality of 20th century India, the narrative is much beyond emotion, romanticism usually associated with many of the works involving "him". At the same vein, it is p...
READ MORE