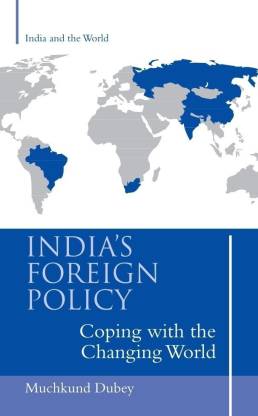 India’s foreign policy has come a long way since its independence, from the era of the Non-aligned Movement, shaped and espoused by Jawaharlal Nehru, to the recent phase of the challenges of globalization and the uncertainty created by the end of the Cold War and the decline of multilateralism and the nation state.

India's Foreign Policy: Coping with the Changing World is a reflection on these transformations and includes prescriptions for strategies and policy measures. It deals with India's evolving relations with important world powers, like the United States, Russia and China. It proffers advice, distilled from experience, on dealing with neighbours, with the limelight on Bangladesh, one of the most important neighbours of India. The author, who played an important role in shaping and conducting India's policies in the global arena, does not hesitate to put forth views that are radically different from the prevailing ones.

The book also discusses happenings that are likely to have a far-reaching impact on India in the near future, including China's emergence as a global power and the Indo-US civilian nuclear deal.  It also casts a glance on India's diaspora, spread out across the world, and the role it has come to play in influencing the country's development and foreign policy. As the first in the 'India and the World' series, the book gives the reader an expert account of the major developments in the world and of the many trajectories of India's foreign policy.

About the Author
Muchkund Dubey started his career as a lecturer in economics and later joined the Indian Foreign Service. During his tenure in the IFS, he served as the High Commissioner of India to Bangladesh and as the Permanent Representative of India to the United Nations, Geneva. He also worked at the Headquarters of the United Nations and UNDP at New York for five years. He retired from the IFS after serving as the Foreign Secretary to the Government of India. He then joined the School of International Studies at Jawaharlal Nehru University as Professor, where he taught for close to eight years.

He was also on the Executive Board of UNESCO, and served as the Chairman of the Common School System Commission, Bihar, and as Deputy Chairman of the Planning Commission of Sikkim. He has written a large number of papers, chapters of books and articles on international security and disarmament, international development cooperation, world order issues as well as social and economic development in India.

It is very interesting to read, for a book on foreign policy. Going through the introductions itself felt like reading further. The author has used wonderful language yet simple. Looking forward for the next books in the series.

And yes, of course, all stars for Flipkart's service. Thank You :)
READ MORE

This is a generally a good book giving a innerveiw of most of India's foreign policy.The neighbors section has been handled really well especially Bangladesh.The author leaves no stone unturned in making the reader understand the value of good relations with our neighbors. Perhaps his stint in these countries (e.g. as High Commissioner to Bangaldesh) makes it easy for him to come across as apt.China has been given unnecessary attention in this book.I feel when we are talking about one chapter...
READ MORE

Feels very good to read due to hardbound and books' design and page quality is very nice. I personally believe that build quality of a book forces you to fall in love with it and spend more time with it. Coming to contents, Dubey, an ex-IFS and ex-professor of International studies at JNU, has written this book as his prime work and devoted all his experience and knowledge to make it a masterpiece. This book is more updated than Rajiv Sikri's book. Loved reading it.
READ MORE

Book is good but packaging is worst, the seller simply put naked book in flipkart polythene pack, no bubble wrap no cardboard etc.
it came to me twisted and deformed.
i thought to return it but needed it urgently so kept it.
nit expected from flipkart.
READ MORE

0
0
Permalink
Report Abuse
+
All 5 reviews
Questions and Answers
Q:how latest is the information in this book? Is it an updated version?
A:Yes
AmazingBuy
Flipkart Seller
0
0
Report Abuse
Didn't get the right answer you were looking for
Safe and Secure Payments.Easy returns.100% Authentic products.
You might be interested in