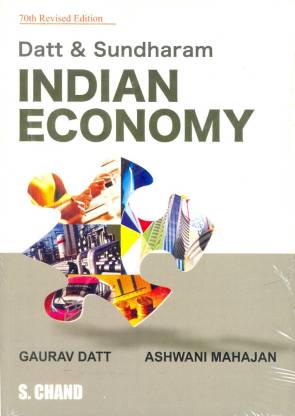 Get notified when this item comes back in stock.
Home
Books
Economics, Business and Management Books
General Commerce Books

Datt & Sundharam Indian Economy gives a complete and holistic picture of the economic condition of India.

The book is divided into five parts. The first part focuses on the nature of the Indian Economy and the second about Planning and Economic Development. The third section talks about Agriculture in the National Economy including discussions on Land Reform and Rural Credit, and the fourth focuses on Indian Industries including Large Scale and Small Scale Industries. The fifth section talks about the Tertiary Sector of the Indian Economy.

The Indian Economy moves at an extremely fast pace. This requires books on the Indian Economy to constantly update their content. The revised edition of Datt & Sundharam Indian Economy contains contains a new chapter on the Twelfth Five Year Plan (2012-17). The old chapters have also been extensively revised. The book also has a few new sections added, and includes the Union Budget 2010-11, the Trade negotiations Update, and Estimates of the 4th All India Census of MSMEs, to name a few.

Ashwani Mahajan is currently an Associate Professor of Economics at DAV PG College, the University of Delhi.

His books include Agricultural Economics, Environmental Economics and Teaching of Economics.

He has published a number of papers and participated in a number of academic conferences.

Gaurav Dutt is an Associate Professor and Deputy Director at Monash University Australia.

His other published book is Bargaining Power, Wages and Employment: An Analysis of Agricultural Labor Markets in India.

He has many years of varied experiences in the field of Economics. He has published many papers in acclaimed international journals such as the World Bank Economic Review, Economic and Political Weekly and Journal of Development Studies.

A to Z about Indian Economy ..

It's an awesome book that has vast information about Indian Economy .. Must for UPSC aspirants for both economics optional as well as non-optional .. It's better to have basic idea about Economics and then start reading this book, otherwise readers may find difficulties ..
Once again thanks to flipkart for timely delivery and great packing ..!!!
READ MORE

A book which is being printed since 1965, and is being continously revised and reviewed to make upto this in hand 69th edition needs no words of praised to lure any serious reader.
I bought this book for preparation of service commissions, and found it really usefull. But yes, don't expect it to teach you basics of economics. For those better look toward ncert. But for the width and depth of its coverage I can comfortably recommend this book for other aspirants.
READ MORE

A MUST read for all who want to understand indian economy !!

the best book that i have ever seen that discusses all the matters of indian economy in an well phrased and easy manner.Once you complete the book you can be sure that you know the economic stand of india very well. All must read it.And as usual the deivery from flipkart is the best.
READ MORE

Good to have book

I purchased the book for RBI Officer recruitment. It contains a lot of matter which I feel is not suitable for competitive exams point of view. The book as the title suggests talks more of Indian economy along with few chapters on transnational bodies like IMF, WTO etc.

Again, a good to have book. Don't buy for competitions as the topics are lengthy.
READ MORE

its a well written book and can engage even those who have had no formal background in economics as such, recommended highly for RBI grade B and UPSC preparations. If you are conversant with economics and fundamentals are good, then I would recommend to consider Uma Kapila.
READ MORE

excellent book on economy. simple language easy to understand. clear idea on indian economy. it completes all portion of indian economy. i did not find any book which covers such vast portion. must read for everyone.
READ MORE

First Thanks to flipkart s fast delivery i got my book in 24 hours .
Good book ,every thing is in enough detailed way n language is enough good to read .Bit weighted but one of the best book for economics ,one of the good option for UPSC general study exam preparation
READ MORE

First of all best services offered by flipkart. I got my delivery in 2 days.
The book is very much informative for a competitive exam. Covers whole lot of topics. Could have been better with less topics and more content.
READ MORE

Page quality leaves much to be desired (too thin), but this is in all other respects a well planned edition (esp. with respect to sizes of graphs and tables and whiteness of pages).
As to the text itself, a stalwart of the subject and ideal for a well grounded review of the included topics, with graduate-level depth.

My copy did come with a cocoon of a moth between the cover and first page though, the 'yuck factor' can hardly be ignored.
READ MORE

The book gives a detailed explanation about everything related to the Indian economy. But the content is static. Regarding usefulness for UPSC preparation, it's good if you have a lot of time (at least 3-4 months). It gives the basics as well as advanced explanations.
READ MORE