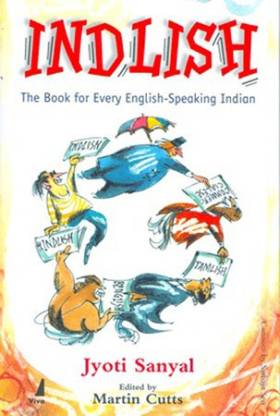 Indlish: The Book For Every English-Speaking Indian by Jyoti Sanyal is a guide to communicating clearly and precisely using the English language.

Indlish: The Book For Every English-Speaking Indian is a must-have for anyone working in the media, especially journalists. The main purpose of this book is to address the difficulties that arise when Indians try to communicate in English via writing.

The text will help readers answer questions such as what contributes to the way we speak, why do we speak English in a passive voice, but switch to active when speaking in our native tongues, and why do most of us fear reading and filing official documents. Although the list of these types of questions is infinite, Sanyal attempts to answer them all. In his book, he also traces the history of the English language in India drawing attention to the change in the quality of the language. Readers will learn to identify and address some common everyday mistakes in their use of the English language. Sanyal has provided many examples and cartoons to provide a concrete example and to draw readers’ attention to the comical nature of many of these mistakes.

Indlish: The Book For Every English-Speaking Indian is divided into seven chapters whose titles are the same as the articles that were originally published in The Statesman. In Chapter 1, which is titled Making A Botch of Writing, Sanyal addresses how one can avoid clutter while writing. In Chapter 2, The Letters We Write, Sanyal shows readers the conventional way that letters are written. In Chapter 3 titled John Company BABOO as Hack, the author provides samples taken from editorials and news reports and shows how journalists misuse certain words. Usage INDLISH Style is the fourth chapter. Here, Sanyal traces the way certain phrases are used, and provides an explanation as to why it is wrong.

In Chapter 5 titled Those Troublesome Midgets, the author shows how misplacing certain words can alter the meaning of a phrase. In Mother Tongue, Other Tongue, Sanyal highlights the difference in syntax between English and Indian languages. He states the English has a rigid syntax, whereas Indian languages are flexible. Therefore as non native speakers of English, Indians are more prone to syntactical errors. In the final chapter, Sanyal offers readers tips and suggestions on writing well.

The main point that readers should grasp after reading this book is that quality writing entails clarity and concision. Familiar words, an active voice, and lively verbs should always be stressed over Latinate words, strings of nouns or prepositions.

Jyoti Sanyal is an author and journalist. He is the ex Dean of Bangalore’s Asian College of Journalism. Sanyal also worked as journalist for The Statesman for over thirty years. He now devotes his time to his website www.clearenglish.in.

English has evolved as a language and Jyoti Sanyal is right in pointing out the persisting British Raj influences.

The book begins with strong British Raj leftovers, slowly there is shift in the theme. It becomes a strong critique on the usage of words and their particular contexts. It thus raises a question - does a speaker of English need to know all of this? If yes, how is the book restricted to the word "Indlish", it might as well be "Amelish" (American English) or "Germlish" (German En...
READ MORE

Jyoti Sanyal's book, as the title says somewhat pedantically, is indeed a must for every English speaking Indian. Jyoti babu tears into our English language newspaper correspondents, and shows us how to write clearly, simply and beautifully. His knowledge of the Indian languages also comes through in that he explains the kinds of mistakes a Hindi speaker would make vis-a-vis someone whose mother tongue is Malayalam. Or Telugu. Or Kannada. The book is not only a rib tickler, but also very info...
READ MORE