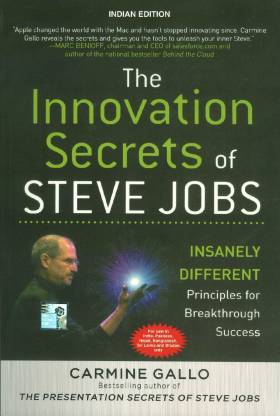 The Innovation Secrets Of Steve Jobs: Insanely Different Principles For Breakthrough Success covers the innovative, meaningful, and effective principles that Steve Jobs’s followed throughout his entire life and career.

The Innovation Secrets Of Steve Jobs: Insanely Different Principles For Breakthrough Success, published in 2010, is based on the seven guiding principles of former Apple CEO Steve Jobs. The book is inspired by his unique presentations, and it presents a step-by-step program about the tools and techniques that were used by the CEO. Apple’s tagline “Think Different”, was Steve Jobs’s way of life, and he ensured that Apple followed it too. This book tells readers about how he started a company in a spare room in his family’s house, and then got fired.

The Innovation Secrets Of Steve Jobs: Insanely Different Principles For Breakthrough Success is divided into seven parts, each one named after a principle. Kick-Start Your Brain encourages readers to seek out new experiences and make changes in one’s thinking patterns. The second principle, Put a Dent in the Universe, contains chapters such as Inspire Evangelists and Think Differently About Your Vision. Say No to 1,000 Things focuses on the importance of simplicity when designing products. In Sell Dreams, Not Products, the author emphasizes on taking a new approach with one’s customers, and to see genius in craziness. Do What You Love urges one to follow his or her heart, and to think differently about their career. The sixth principle speaks about creating insanely great experiences, and the seventh one showcases how to convey messages differently. The book also contains two additional chapters, one of which is What Would Steve Do? The other one is titled, One More Thing, Don’t Let the Bozos Get You Down.

The Innovation Secrets Of Steve Jobs: Insanely Different Principles For Breakthrough Success has been written after extensive research by the author.

Carmine Gallo, born in 1965, is an American author, communications coach, columnist, seminar leader, keynote speaker, and a former television anchor and business correspondent. Gallo has authored Ten Simple Secrets of the World’s Greatest Business Communicators, The Presentation Secrets of Steve Jobs: How to Be Insanely Great in Front of Any Audience, and The Apple Experience: Secrets to Building Insanely Great Customer Loyalty.

The author completed his BA in Political Science from the University of California, Los Angeles. He did his MS in Broadcast Journalism from the Medill School of Journalism, Northwestern University. Gallo is a columnist for Forbes.com, Monster.com, and BloombergBusinessWeek.com. He was the Vice President of Media for Ketchum, and has been featured in The New York Times, CNBC, The Wall Street Journal, and MSNBC.com. He is now the President of Gallo Communications Group. Gallo lives with his family in Pleasanton, California.

Good one to give a start-o!

Ironically, flipkart delivered this book the day Steve passed away - Oct 5th. I had watched a movie called "The Pirates of the Silicon Valley" and was looking for a good motivational book on Jobs. More than being about Jobs, this book gives you the best tips, especially for the people who have the fire inside to do something different and are stuck.

Read this to feel motivated to make a difference!
READ MORE

Awesome.
Must read to being an entrepreneur.
READ MORE