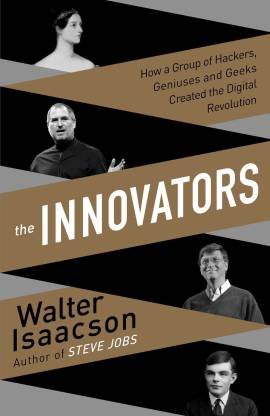 Computers and the Internet have jettisoned this world into the future. In The Innovators, Walter Isaacson tells the story of those who made these magical inventions possible.

A few decades ago, the very thought of having a world of information at our fingertips was unimaginable. The Internet and computers have changed the world forever, bringing a technological revolution with them to sweep us into the twenty-first century. However, the conception of these magnificent creations was a long process. It took the minds of geniuses whose ideas had the potential to turn heads and garner attention. These men and woman shaped the world into its current form with their ideas and inventions. What made these innovators so different from their peers? Why did some of them rise to astounding heights while others failed? In this breath-taking account of the story of technology as we know it, Walter Isaacson begins with the story of Ada Lovelace, the woman who pioneered computer programming in the 1840s. He goes on to tell the stories of others like her, giants such as Vannevar Bush, Alan Turing, John von Neumann, J. C. R. Licklider, Doug Engelbart, Robert Noyce, Bill Gates, Steve Wozniak, Steve Jobs, Tim Berners-Lee and Larry Page. Isaacson reveals how they transformed their ideas into innovations and how their mastery of teamwork and collaboration empowered their creativity. This book shows readers how great ideas are actually fostered by working together and how great innovators created magic.

Walter Isaacson is an American biographer known for his books Kissinger: A Biography, Benjamin Franklin: An American Life, Einstein: His Life and Universe and Steve Jobs.

Isaacson graduated from Harvard University and during his stay, he was President of the Signet Society, a member of the Harvard Lampoon and a resident of Lowell House. He later went on to study at Oxford as a Rhodes Scholar, reading Philosophy, Politics, and Economics (PPE). He has also served as the Chairman and CEO of CNN and the Managing Editor of Time.

This is an informative, timely, and well-written tome that acts as a good refresher for even those who have been following the tech industry or have been a part of it for several years. It is obviously also an useful read for anyone with a keen interest in this fascinating sector of the global economy or students of innovation and entrepreneurship.

What I found particularly interesting, and at times revealing, is how the author has managed to go beyond the expected or obvious, and describe ...
READ MORE

Best book for who really interested to know about the evaluation of technology and about great people who have given as a piece of electronic box to sit and do everything. Nice to read. But the quality of the paper & binding is really bad. Many pages has been teared before i complete this book.
READ MORE

Traces the Digital Revolution in an unbiased manner.

The plural form of Innovator i.e. Innovators on the cover of the book gives a clear insight of the philosophy of the book. The digital revolution is culmination of efforts of people in different as well as 'same' areas. Walter has made great effort to inform the reader about 'all' the people who worked on the same thing at different places and times. He truly gave an unbiased insight into the digital revolution. A must read for people who've read Steve Jobs by the same author.
READ MORE

A well-written account of the Digital Revolution spanning two centuries

The Innovators is a well–researched, well-detailed, and well-written piece of literature on the Digital Revolution. While the book does have its slow moments, it is a compelling piece of read in the overall of scheme of things. If you are an engineer or a computer scientist, you’ll be amazed to see how much you do not know about the inventors and their inventions. If you are not an engineer or a computer scientist, you will see how products that you use in your day-to-day life came about to b...
READ MORE

An easy-to-read account of how computers and the internet have evolved over the centuries. Isaacson has given a detailed account of how the technology has developed, the first innovator being the daughter of the man who was anti-machines. From a world which believed machines were not good, to today, when computers and the internet are parts of almost everything and everybody, the account is very interesting to read, albeit a bit slow at times. For a technology enthusiast, this would prove to ...
READ MORE

Nice book about tech revolution, it is the history of tech.
READ MORE

1
1
Permalink
Report Abuse
+
All 27 reviews
Questions and Answers
Q:what's this book all about?
A:Biography of Innovators who created Digital Revolution.
Yellow Paper Bookstore
Flipkart Seller
0
0
Report Abuse
Read other answers
Didn't get the right answer you were looking for
Safe and Secure Payments.Easy returns.100% Authentic products.
You might be interested in