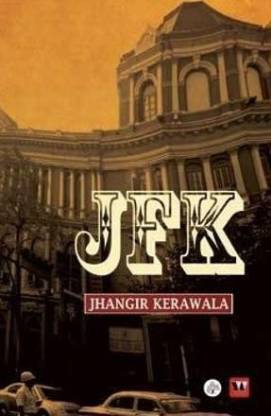 JFK ... A dying man’s last word ... A plea, an accusation or a clue? That’s what the police couldn’t figure out. What they did know was that they had serial murders in broad daylight, and just one suspect with little motive ... Jatin F. Karunamoi, the dead man’s best friend. Jatin is no hero; he’s an unemployed 50-year-old, desperate to find a job. But his only hope for a life of dignity lies in him finding the real killer. As he jumps headlong into the investigation he has little idea what he’s getting into ... a hunt for the faceless murderer. Each step Jatin takes to unravel the mystery brings him closer to insanity as he encounters unimaginable situations, devious characters, intrigue and ... death. In this fast-paced thriller set in Kolkata, debut ant novelist Jhangir Kerawala brings the reader face-to-face with the ugly underbelly that looms large beneath the bright lights of urban India.

About the Author
Before plunging into the creative field, Jhangir a commerce graduate from Kolkata, paid his dues for almost ten years as an accountant and then went looking for adventure and travel, by making a lateral shift into sales.

After experimenting with a comic series, cartooning and short stories for children, JFK is Jhangirs debut into the world of novels.

The story was not so great as I had expected. It starts well but everything in the story is very predictable and there is not much suspense. It was like reading a average movie script. The writer should have put in little effort to thrill the readers.
READ MORE

Good one By Jahangir

I am really interested in crime thrillers and JFK is one of them. This book is fast pacing and will make You travel the city kolkata.

on a whole it good and recommended, but the last few pages are in lag.

except that the whole book is a good one to read.

Indian thriller writing at its best

I brought this book since I was looking to read an Indian thriller book. I was not sure if it would actually turn out to be good. But once I began reading it, i finished it in two evenings flat.
The plot has turned out well, the characters have interestingly been worked out.
Twists and turns abound in this book.
Infact, ten pages into this book and you would not want to put it down.
This book can be made into a terrific English film if it is given in the hands of a good director.
READ MORE

The title is intriguing. Makes one wonder what it is about.

A very fast-paced novel. I completed it at one go. The characters are well-defined, he plot shifts all the time and there'senough humour in it to tickle any ribs.
I appreciate the subject the book deals with too...child abuse. It's a very neglected subject and desperately needs reminding.
READ MORE

first of ol hats off to delivery guy. they delivered it in 2 days. story is good but i found it going with slow pace.
READ MORE

thriller all the way

fast paced novel, doesnt add irrelevant details and sticks to the plot... a page turner, finally a good thriller in an Indian setting... recommended esp to read on a journey when u want to complete a novel in a single sitting
READ MORE

The book makes a great read. It deals with murder mysteries, suspense and further delves into a heinous crime that is no less than a sin.

The story begins with two murders one after the other and till the end the plot keeps you on the edge. Two unrelated people from different places and backgrounds are killed. JFK is not a name but a code that is very crucial in finding the motto for the murders.

An unemployed man Jatin, plays a perfect pal and dauntlessly he fights to unravel the truth be...
READ MORE

Pacy, thrilling, fascinating. This is one novel that needs to be read now. And be made into a movie ASAP. Chris Nolan, Danny Boyle, Ang Lee... are you listening? Way, way better than what most indian "authors" are putting out these days. This is a must read if you're done with the "CB" genre of trash that's in Indian bookstores these days. Well done, Jhangir Kerawala.
READ MORE