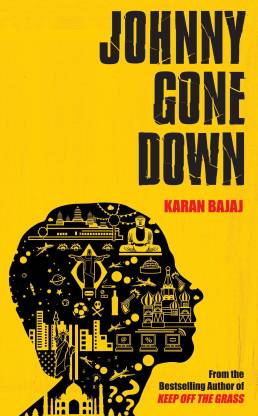 Johnny Gone Down, by Karan Bajaj, is a compelling adventurous tale of an ordinary man battling an extraordinary destiny. It is the author’s second novel.

Nikhil Arya was once an Ivy League scholar with a promising bright future at NASA. But now, at forty, he is impoverished, destitute, and only minutes away from blowing his brains out in a hellish present-day bickering. He is well aware of the fact that it wasn't meant to be this way. An innocent vacation became a heroic intercontinental expedition, which saw Nikhil becoming many things - a genocide survivor, a drug-mafia lord, a vagrant accountant, a Buddhist monk, a software tycoon and a deadly game fighter. After twenty years of restless nomadic life, Nikhil, also known as Johnny, is exhausted. He has abandoned his wife and son ten thousand miles away. But he has to get ready for his final act, and there is a possibility of him losing in a way, even if he wins. Will he prepare himself for it? Is there any grander triumph than living a life with absolutely no limits? Will he be able to lead a normal, happy life with his family ever?

Karan Bajaj is an Indian-American author. He was born in 1979 in an Army family, and studied in several schools in New Delhi, Lucknow, Shimla, Jabalpur, Assam, Ranchi and Bangalore. He claims that his passion for traveling is the main source of inspiration for his writing attempts. He is pursuing his Brand Management career with Kraft Foods, New York, and had made it to the ‘Top 40 under 40 US Marketer' list by Advertising Age in the year 2007. Keep off the Grass, his debut novel, has been on bestseller lists in India ever since its launch in 2008. It was a semifinalist for the Amazon Breakthrough Novel Award, and was also shortlisted for the Indiaplaza Golden Quill Award, among several other honours and recognition.

Worth a read - definitely !

However that is not to take away anything from Karan's Jhonny Gone down. A definite good read. Gripping storyline. Thrilling. He(author) has the ability to keep up the reader's interest ( which very few ...
READ MORE

Johnny Gone Down - But definitely in the shelf of BEST BOOKs!!!

Though I was little bit concerned about buying a new author (as I had enough few bad experiences buying new others and I haven't read his Keep of the grass by then), once I started reading this book I found that it was completely worth!

A really awesome book & I can't believe its his second book! A MUST read if you like thrillers.

And as usual FK service was simply AWESOME! They got three books delivered in LESS THAN TWELVE HOURS...! Really impressive guys, keep it up..
READ MORE

Feels like some hollywood movie. Good read but it's not a book you recommend to someone. Lots and lots of good book out there, it won't matter if you miss this one in particular.
READ MORE

This book is not Time-pass.Needs peaceful atmosphere.

Advise = Not recommended to read while traveling. This book is not Time-pass. It needs peaceful atmosphere.

What I liked = I observed that debutant author with his success of first book, is always in hurry to launch another book. And here it makes mistakes. In hurry he forgets to have originality and to have something different from the first book.

However, not in the case of Karan Bajaj. After success of 1st book, it took considerable time to lau...
READ MORE

It was awesome. All reader should be happy have this book.
I received a free copy of this book in exchange for my honest review.
READ MORE

Gifted to My Friend She told Me Book is awesome.

Gifted to one of my friend. She told me book is amazing and well written. Lets see when I will read it I will update my reviews ;)
READ MORE

Author knows what he is doing. Excellent thriller. Finished it in a day. Highly recommended for any one looking for a thriller. Will make an excellent companion while traveling.
I had not read keep of the grass earlier, but now cant wait to get my hands on it.
READ MORE

Been there, done that!

This is book is too dramatic to be true and author tried very much to portray a truly beautiful soul searching or real meaning of life without letting down the spirit even in the worst scenarios in life like losing an arm. This is like a world tour India-America-Cambodia-Brazil-America-India. This is ridiculously magnetic and you would easily fall in the groove at the earliest happenings in the story,a definite page turner. Stands as an inspiration for any traveler madly going out without mon...
READ MORE

A different kind of Book..

I liked the story ,plots and the way the author has narrated the story. Its a welcome change from an Indian author who has tried something different than regular love stories.If some one get taste of reading travel ,adventure it has all such tatses.....
READ MORE

Actually this is my 6th book.I quietly impressed by the outline of the book,which was wrote in the back.And it was quietly flimsy stuff.But it was like an adventure with this book.And each chapter is kind of impressive.