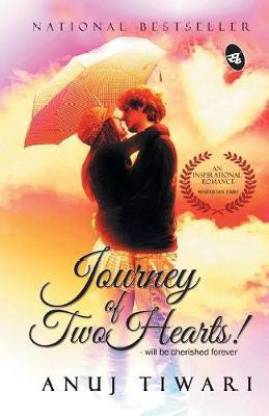 Journey Of Two Hearts! is a refreshing new love story quite different from its peers. Based on the real life events of the author, it portrays the influence of the Internet on modern day love.

Journey Of Two Hearts! is an autobiographical story made up of 53 short and easy to read chapters that deconstruct love in urban India against the backdrop of a technologically-savvy world.

Journey Of Two Hearts! begins with the author’s friend Maddy playing a prank on a girl named Pakhi using Anuj's phone. Anuj is an extrovert who never wants to fall in love. However, the prank leads to Anuj and Pakhi forging a bond of friendship that is strengthened over phone calls and internet chats. After months of conversation through internet, they finally decide to meet and soon realize that Cupid had struck them long back and that they are head-over-heels in love with each other. Their love reaches dizzying heights with no limits, no ends and no expectations whatsoever.

Like in other love stories, they come face to face with a few twists and turns that threaten to tear them apart. Soon conflicts and struggles become a common occurrence in their once near-perfect romantic story. In Journey Of Two Hearts!, the protagonist Anuj takes the reader along with him describing the cherished moments that he spent with his beloved Pakhi, his days of hard work in college, his aspirations for the future and about the girl whom he had hopes of marrying someday. In a heartfelt and emotional way he talks about the circumstances that led to him losing the love of his life.

The book was initially a diary that the author planned to gift his wife post their wedding. However, as destiny had something else in store for him, he completed writing the diary when he undergoing treatment for depression in a hospital for six months. Journey Of Two Hearts! is the book adaption of that diary.

Anuj Tiwari is an author and IT professional.

He was born in Bareilly, Uttar Pradesh, and studied at Jaypee University. He currently works for an IT company. Tiwari spends his weekends volunteering for various NGOs. He is also a motivational speaker.

I have read so many books of Indian authors. When I saw a very name in the rack of book at the crossword store then I came at home and placed an order from flipkart (as they give discount :P).
When I started reading I thought this would be same as the other stories but when I finished- my eyes were wet, nothing more to say about it.
There are some errors in the book but in front of story those nowhere exist. Now coming to the hatts off points-

-How dedicated the guy in the story is just aw...
READ MORE

Your work is appreciated as your speech, Well done Anuj

Nothing to write here. Coverpage is sweet and cute and Author as well. As I know Anuj Tiwari. You are gem... Just go like this. Waiting to get the book as soon as possible and read it over night. All the best Anuj Tiwari, just spread love as you say :P
I am really excited to know about Pakhi in the book.
READ MORE

I just received my book in the morning and finished almost in one go. I couldn't stop myself to write here about Anuj and Pakhi and their love for each other. This is just superb!
I just can stop thinking about Anuj and Pakhi after reading this novel!
I just loved it!
A highly recommended book.
A true love story!
A salute to Pakhi and Anuj
BUY IT RIGHT NOW!
if u dont read this book then u'll miss something very important in ur life!
U will surely cry after reading this book!
its that touchin...
READ MORE

One more author in my fav list after CB and Ravinder Singh.

A book which i think can make any one lost in it, if one start reading it i bet can hardly stop for any reason or take a break...its seems not jst a book but a complete journey which takes u to all the mix baggage of emotion...jst cud not stop reading it once i picked it up, n was compelled to write this review....me being a regular reader of almost every upcoming novel is today writing this at this odd tym jst coz the the book deserve this, sacrificing once sleep is nothing as what the book ...
READ MORE

A Truly Heart breaking Story I have read this when my neighbour gave it me.
As the title describes, it is really A truly heart breaking love tale.
The book appeared so real because I strongly belive that
since it is a true love story and each and every line Anuj had narrated was happened so real, was reflected in the book.
My wife usually says I am a kind of Mentally tough. But this book made me some thing different. Some thing the way I look at things. After reading this book , a few day...
READ MORE

Journey Of TWo hearts is the true story of Anuj Tiwari. I really enjoyed reading this book. The Love between them was beautifull. Anuj is the guy everyone will dream for. His love for pakhi really touched my heart. The way he proposed her by giving 7 self made cards. I myself fell in love with Anuj. The ending really made me cry. I hope and pray pakhi realize someday Anuj's love for her. She could also feel the pain which Anuj faced when she left him. I strongly rocommend friends to read this...
READ MORE

A journey to REMEMBERRR!!!! :D

The novel was truly FABULOUS!!!
Thoroughly enjoyed reading it :)
I would definitely suggest & recommend it to ALL.
Everyone can associate very well with the book. The book is written in simple words which actually works as its USP!!!
As Anuj belongs to my city only so i was very much excited about the book n it came out to be an incredible work.
Many many congratulations to Anuj!!!
Keep writing!!! Eagerly waiting for your next works :)
READ MORE

This is my first review about a book. I saw 5 star reviews about this book, so i bought it, thinking it must be a good read. But it was a crap. I don't know where to start.......

1. Too many, too many, too many grammatical mistakes (5-6 on EACH PAGE). I guess the author was using old-fashioned typewriter!!! And what were the publishers thinking??? Didn't they send the book for proof reading before publishing it???

2. There is no story line. Boy meets girl (I don't even understand why the gi...
READ MORE

Fell in Love with you- Not Just A Love Story

What is love? Anuj gave me a new definition of love. I loved the book so because of its narration and words used in the book.
One of my friends refereed me this book and before reading the book I thought another love story in the market but when I finished it. My wet red eyes and my heart was completely changed.
You are so sweet anuj and pakhi. Fell in love with you
READ MORE

Anuj really touched the hearts with his way of romantic expression. It has all emotions in it, Happiness, Romance, Love, Pain and all. Ran out of tears while reading the last pages of the book... its a recommended book for those who really love true love stories...!
how cud anyone write wid so much passion.. it is d best buk i hv ever read.. i had tears in my eyes.. i felt more love for my fiancee n felt very lucky to have him ..
d starting was not so interstng but page by page i was devlpng ...
READ MORE