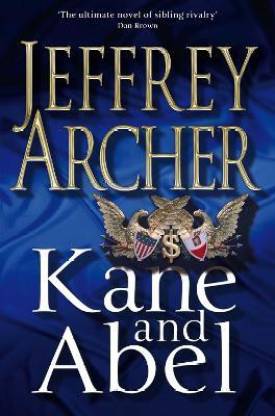 Kane And Abel by Jeffrey Archer follows the lives of two people, Kane and Abel, born on the same day, but on opposite sides of the world and whose destinies are intertwined.

The story of Kane and Abel begins with their birth on the same day in two contrasting environments. William Kane grows up in a life filled with privilege and opportunity. He graduates from Harvard, and eventually becomes a wealthy banker. After the passing of his father, his mother remarries. Kane’s stepfather turns out to be gambler and womanizer. After his mother’s death, he throws his stepfather out of his home.

Abel Rosnovski is orphaned at birth and raised by a family of trappers. Although he grows up in destitute conditions, he has exceptional intelligence. Abel is asked by the Baron to be his son’s companion. After Abel moves into the castle with the Baron and his son, World War I begins. The Germans attack the castle and murder the Baron’s son. Just before the Baron dies, Abel discovers that the Baron is his real father. He is then captured by the soldiers and sent to Siberia. Abel manages to flee to Turkey and there he is rescued by British diplomats, and he eventually moves to the U.S.

In the U.S., Abel works as a waiter at the Hotel Plaza during the day, and takes business courses at night. Abel’s hard work and determination is soon recognized by the hotel’s owners, and he is soon appointed as manager. When the Great Depression hits the U.S., the hotel faces many financial hardships, requiring urgent funding from a bank. The hotel owner commits suicide and mentions in a letter that the Kane and Cabot bank refused to help them. Abel promises to seek revenge from the bank. And thus sets forth a chain of events which ultimately changes the destinies of both Kane and Abel.

The publishing of Kane And Abel was met with huge international success. It grabbed the number one spot on the New York Times Bestseller List. The book was also turned into a CBS miniseries. The book has sold over 34 million copies till date.

Jeffrey Archer is an internationally recognized, best selling author and playwright, who hails from the UK. Some of his other titles are Not A Penny More, Not A Penny Less, The Eleventh Commandment, To Cut a Long Story Short, Twelve Red Herrings, The Prodigal Daughter, and First Among Equals.

Archer is a graduate from Brasenose School, at Oxford University. He also dabbled in politics, becoming a Member of Parliament for Louth. After making a poor investment decision which forced him into bankruptcy, Archer began his writing career. His debut novel Not A Penny More, Not A Penny Less, became an instant bestseller and set the course for other successful novels. Jeffrey Archer is married to Dame Mary Archer DBE. They have two sons, and reside in the U.K.

since the first page to the last Archer has managed to grab readers' attention,and the feeling "what next?" almost 600 pages will feel like 60 pages to read.and not to mention the adventures of life that Abel takes up in siberia, comes infront of eyes like a movie scene.just like any other Master's book this too has a mindblowing end..and the image of 'william lowell kane' will make any girl out der fall in love with..it is ofcourse a MUST READ book.please dont make a mistake of NOT reading s...
READ MORE

Even A NOBEL PRIZE isn't Enough!

At the back of the book, The Daily Telegraph reviewed saying, "If there were a Nobel Prize for storytelling, Archer would win". Before reading the book, this statement might seem to be an overstatement and if you think my title is too sumptuous then please read the book.
The novel revolves around two characters, William Lowell Kane and Wladek Koskiewicz. Two men who cross paths in the future yet with different backgrounds. One gets things too easily being the son of a billionaire and the othe...
READ MORE

Class Boxed Edition for a Timeless Classic - A Collectable

I am a Great Fan of Jeffrey Archer as Millions of other who have treasured their copy of Kane and Abel to be read countless times to bring out that discerning occasional tears time on time.

What we all lacked in our treasure troughs was a good hardcover edition which can be passed on to our children, here is the chance for it, in a country where getting hands on hardcover editions is tough if you have missed the launch, Flipkart is doing a wonderful work in making these imported edition ava...
READ MORE

One of the best books I've ever read

Kane and Abel was recommended to me by one of my close friends and it turned out to be the best bargain as soon as I read the first chapter. Kane and Able is a story of two men who grow up 1000 miles from each other and doesn't have anything in common apart from their birth dates. Jeffery Archer writing is so gripping that many a times the book becomes unputdownable. The book has everything in it- Drama, emotions, love, hatred, success, failure making it a complete package. By far it is one o...
READ MORE

One of the best sibling rivalry books out there. Archer is a master story teller of our generation and this is his best work in my opinion. I make sure I read it once every year.

Its a story spanning right from the birth of two boys on opposite sides of the world, to their deaths, constantly crossing paths, trying to destroy each other and ultimately fulfilling their destinies.

From the action and adventures of the world war to the nail biting, board room drama of a corporate bank, this boo...
READ MORE

If there ever was an epic written in the modern day about modern times, this must be it. For it not only narrates a fantastic tale of luxury and difficulties, impressively tangled with each other, it spreads the ground for other books to carry forward its saga.

Probably one of Archer's all-time best creations, this is a must read for everyone.

You can just click the 'Buy Now' button and turn a new experience in your book-reading life!

The Best Book in the Series!!!

Simply awesome...the book will grip you like an electromagnet till you have finished the very last page!!
Superb plot......Simply have no words for it....A must read for all Jeffrey Archer fans and the perfect book to start with for the people who have never read His books....Also thanks to Flipkart for their super service...
READ MORE

glued me to my chair till the last page

another superb book by sir.archer. his writing, style so different and unique that you just cant get enough of him. a very good read and well recommended.
READ MORE

This is one of the best books in it's category. It is a good competitor for Dan Brown, Sidney Sheldon etc. Every time you read the book, it is quite difficult to take your eyes off on the middle of your voyage through the book. Every instances are perfectly explained by Jeffrey Archer and the intriguing scenes gives you a nail biting situation (I didn't bite any nail, of course). And the money for the book you will spend is totally double the worth and you never regret for anything.

Other Self-Help Books
Min. 30% Off
Shop Now
Back to top