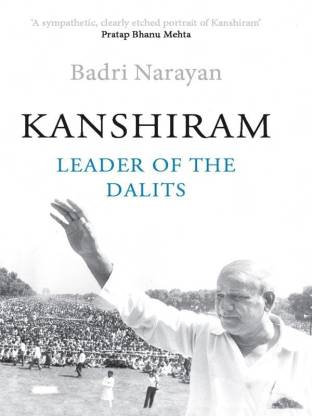 Kanshiram: Leader of the Dalits provides an incisive look into the life of Dalit icon, Kanshiram, and his journey to becoming one of the most influential political figures of India.

Kanshiram: Leader of the Dalits penned down by Badri Narayan is the biography of Kanshiram, Dalit leader and founder of the Bahujan Samaj Party. The book traces Kanshiram’s journey, from his early years in rural Punjab and his association with the followers of Ambedkar in Pune to the initiation of the All India Backward and Minority Communities Employees' Federation (BAMCEF) and the eventual establishment of the Bahujan Samaj Party in 1984. The author shows how Kanshiram influenced Dalits with his powerful speeches and cycle rallies. The book also provides insight into how Kanshiram struck opportunistic alliances with higher-caste parties to seize power for his people. The author has evocatively described his extraordinary relationship with Mayawati, and the great role she played in fulfilling his vision. Narayan also writes about the modifications Kanshiram made to Ambedkar’s ideas, while Ambedkar sought for complete eradication of the caste system, Kanshiram saw caste as a basis for creating a Dalit identity and a source of political empowerment. Authoritative and insightful, Kanshiram: Leader of the Dalits provides a rare portrait of a man who changed the face of the Dalit community in Indian politics.

Badri Narayan is a renowned Indian artist, illustrator, and author. He started painting with no formal training. His first public showing was in 1949, which was followed by a solo show in 1954. He has had 50 solo shows in National Gallery of Modern Art and the National Museum (India) in New Delhi. He is also an illustrator of children’s books and writes short stories. He has been honored with the Padma Shri in 1987 and the Maharashtra Gourav Puruskar in 1990. He died on September 23, 2013 at a hospital in Bangalore.