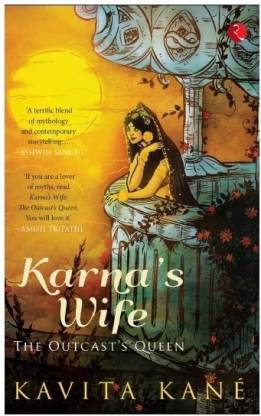 A lot has been written on the Mahabharata. From various perspectives, each author telling the story of one central character. And then there are authors like Kane who speak of the lesser known people, in this case the wife of Karna – Kunti’s son – the outcast, who was only accepted by Duryodhana.

Uruvi – the central character in this novel speaks of Karna – the unsung hero. She also speaks of herself, of her relationships with his family, and the way he is. The writing is crisp and to the point in most parts, while in others, the description is too much to handle.

Kane has a keen eye of the incidents that occurred in the Mahabharata and weaves in her story quite cleverly in the narrative. Historical fiction is not written a lot in the country as it should. Books such as these will sure change the trend. A must read to not only know more about the epic battle but also a different point of view.

A classic retelling of the Mahabharata from the unique perspective of Karna's wife Uruvi, who is witness to the twists and turns of Karna's fate and his role in the Divine plan.

Published in 2013, Karna's Wife: The Outcast's Queen is a unique novel in the genre of magic realism that tells parts of the Mahabharata through the eyes of Uruvi, the wife of Karna, who is the unsung hero of the Epic tale.

The novel begins with her story, an accomplished Kshatriya princess who chooses Karna, the 'sutaputra', over Arjun, an antithesis of Draupadi's choice. A bright, witty and intelligent women completely in love with Karna, the novel traces her struggles and travails, coming to terms with Karna's socially inferior position and her own title as the 'Outcast's Queen'. How she uses her wit and intelligence to be accepted into his family is evocatively demonstrated. Slowly, she becomes Karna's mainstay, the one he comes to for advice and solace, and yet, she is helpless in the face of his wilful and blind obedience to Duryodhana. She stands behind him and is his true support when the entire world had turned against him, through a series of cruel misfortunes and turns of fate.

The entire story of Karna and Uruvi unfolds against the larger backdrop of the Kurukshetra war between the Pandavas and the Kauravas. Karna’s fierce loyalty to Duryodhana, Duryodhana’s constant love for Karna, his birth entirely shrouded in mystery and Karna’s associations with the Pandavas and Draupadi, these are all some of the themes explored in this novel. Karna's character is also deeply fleshed out, his role as a son, father, husband, friend, warrior and devotee. Uruvi is a silent witness to the strength and valour of Karna, his immeasurable love for Krishna and the unfortunate end he meets with.

The novel has received good reviews from readers around the world as being a unique recasting of an old story in a fresh and new form. Karna's Wife: The Outcast's Queen is recommended for anyone interested in Mythology.

Kavita Kane is a novelist and journalist and currently works as the Features Editor of Pune Mirror.

She is a post-graduate in English literature and Mass Communications. She is a mother of two teenage daughters and currently lives in Pune. 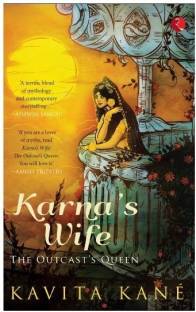 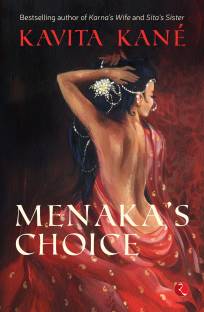 Uruvi princess of Pukeya & daughter of King Vahusha and Queen Shubra was a beautiful, brilliant, kind, brutally frank, lively and tempestuous lady. She fell in love with Karna at first sight. Despite all the attempts to convince her otherwise, she had her way and married Karna to become his second wife (His first wife was Vrushali).

Karna is a classic case of a capable, kind and brave person yearning for recognition. Uruvi understands this, worships Karna for what he is, is indignant about t...
READ MORE

This is enchanting!! One of the best book I've ever read. If you want to know #Karna, go for it. The History has been written exactly, without manipulation.. it's very authentic in the case of information. And a heart touching love story in the background of Kurukshetra, and much more!!
READ MORE

Karna's wife is a storybook of an unspoken queen called uruvi...their love story which is a terrific blend of mythology with beautiful narrative....
It's a must read book..
READ MORE

Firstly, I complement Kavita Kane for the rare subject she has chosen. She being the journalist, the style is smooth. The dialogues she has given to rise is appealing. I asked many a person to tell me the name of wife of Karna and no one could reply. I have to tell them, "she is Urivi". The wonderful character, audacity, practical approach she has, have been delineated in her novel. Every detail of Mahabharata she related we have read and correlated to her writing. Especially, the last c...
READ MORE

I always believed that Karna was a very important protagonist of Mahabharatha and was eager to read more about him. This book proves extremely useful and is well written.
READ MORE

My interest for the mythology has made me pick this book and iam more than happy reading this. Having read similar one 'The palace of illusions' i find this book a very good blend of important events of mahabharata and story telling skills. The book somehow turns you overwhelmed and makes u feel sorry for uruvi , karna's wife. Like always and like elsewhere, karna's heroics will be the highlight. A good read indeed !
READ MORE

this book is filled with contradictory characters

this book is at best a women's fiction novel based loosely on some characters of the Great epic. it is simplistic and would make a good Mills & boons novel. the author tries to give the characters depth but they fall flat due to their contradictions. the love angle between Draupadi and Karna is over played and Draupadi is made to look like a woman of loose and fickle character which is i didn't appreciate. when an author is basing his or her story on famous and revered characters of a great...
READ MORE

To Start with, I was pretty excited to read this book as i wanted more details on the Mahabaratha and in particular Karna and Arjuna's Rivalry.
The Book starts off with a good pace, giving us a lot of insights, then its too slow and boring, you may also want to skip a few pages as well as they are not even connected. the end part is again interesting.

So Overall I feel if the pace was handled better the book, it would have been a good read. On the other side, imagination of a character lik...
READ MORE

There have been different perspectives of the one of the worlds greatest story ever told. Be it Karna (Mrityunjay by Shivaji Sir), Bheem (Lone Warrior by Vasudevan Sir), Draupadi (Palace of Illusions by Madam Chitra).. All these characters play an important part in the main plot and most of their characters, anecdotes, episodes and saga are in the Mahabharat. However, this different attempt portraying the perspective of Karna's wife's eye is a brilliant attempt. Nothing much is known about Ur...
READ MORE

Karna's wife: The Outcasts's Queen - is a book which tells the story of Mahabharata, but from the viewpoint of Uruvi, with Karna as the main character. Uruvi is described in this novel as the second wife of Karna but I doubt that name can be seen anywhere in the Mahabharata. The deliberate misnomer in the title sets the tune perfectly for Uruvi's story.

Almost every character from the Mahabharata is mentioned at least once in this novel. It is indeed refreshing to reread the great epic again...
READ MORE