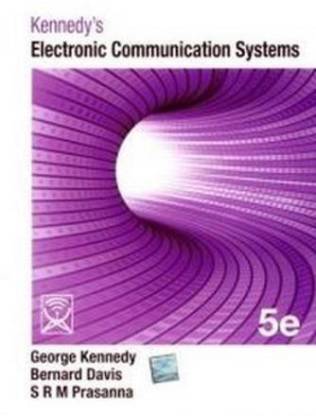 Get notified when this item comes back in stock.
Home
Books
Higher Education and Professional Books
Electronics and Communications Engineering Books

Electronic Communications Systems refers to the technology and science that is involved in transmitting electrical impulses over a distance, via radio, telegraph, cable, telephone, or television. The entire electronic communication system involves a transmitter, a channel, a noise variable, and a receiver.

Electronic Communication Systems is a class text on the subject of Communications. It simplifies the theory and presents it in a theoretical and illustrative manner. In this newly revised 5th edition, the original formula of the previous edition has been maintained but important updates to the technological aspects have been also included. A significant discussion on Digital Communications has also been given consideration. This update has helped the text gain an important place in the field of electronic communication systems.

The text is organized into 18 in-depth chapters. Some of the topics that are covered are Noise, Antennas, Transmission Lines, Radar Systems, Waveguides, Television Broadcasting, Microwave Tubes and Circuits, Resonators and Components, Broadband Communication Systems, and various techniques in Amplitude Modulation, Angle Modulation, Pulse Modulation,and Digital Modulation techniques. Some of the key features of this text include new chapters which cover topics such as Pulse Modulation and Digital Modulation. The text also provides enhanced coverage on Radio Transmitters, Receivers, and Analog Communication.

Electronic Communication Systems was published in 2012.

Bernard Davis is an Author and Electronics Instructor at Dade County Public Schools.

S. R. M. Prasanna is an Author and Professor in the Department of Electronics and Electrical Engineering at IIT-Guwahati.

Prasanna completed his Ph.D at IIT-Madras. He has authored numerous research publications which have been published in esteemed journals such as Elsevier and the International Journal of Speech Technology. Apart from teaching at IIT, he has also given lectures in various countries such as China, Japan, and USA. Dr. Prasanna is married and currently resides with his family in Assam.
George Kennedy is an Author and Supervising Engineer at Overseas Telecommunications Commission.

Buy it, its a good book if one want comprihensional text but make sure that you have an accompanying reference book lie Wayne Tomasi's, as details are missing all over the testbook
READ MORE

Page quality is not good.. Content is super
READ MORE

Nice book for improving your knowledge in Communication engineering and happy with low price as compared to book stores...
READ MORE

this book contains quite a lot of problems but the theory associated with those problems are not provided..one needs to consult another book like haykin or taub schilling in order to do some of the problems , theory of which is not provided..
READ MORE

Order OD40716063534. you had sent message from my mobile that the colis will reach in my address on 19 saturday so you came before the date .in that i was in college i can not be able this time . so i need the book .
READ MORE