Description
Non Skid SPD Pedals with Adjustable Footstraps Storage : Transport Wheels For Easy Storage Design : Sturdy and Robust Design Allows for Greater Stability and Long Life Handle Bar : Ergonomic Handlebar Adjusts to Angle of Maximum Comfort Bottle : Aluminium Sports Bottle With Bottle Stand Model : Semi Commercial. Best For Home Gym Bike Colour : Yellow Assmebly : Easy To Assemble. Buyer Has to Assemble Himself
Read More
Product Description
There's no need to make time for the gym when you can bring the gym home, with this Kobo spin bike. This exercise bike is designed to help you work out both your upper and lower body. You can regulate the pressure of this bike, and adjust its seat according to your preference. This workout machine is equipped to suit the requirements of people across all shapes, ages, and sizes. 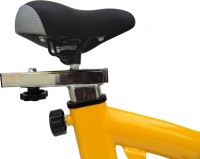 The bike's seat is equipped with the Shocker System, and can be adjusted according to your preference. 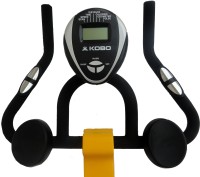 Data such as the scan, time, speed, distance covered, hand pulse, and the amount of calories burnt are displayed on the bike's LCD monitor. 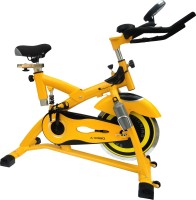 Its saddle and foam-fitted handle is adjustable and is designed to suit the needs of people of different builds and heights. 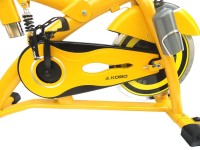 Workout as hard as you want to, because this bike's non-skid SPD pedals ensure that your feet don't slip. These pedals also feature adjustable foot straps storage.

The bike's handlebar boasts a sturdy and robust design which allows greater stability and durability.

The bottle holder is incorporated into this bike so you always have a bottle of water at hand while working out. 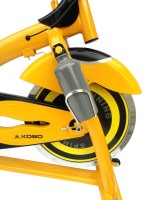 This exercise bike is easy to assemble. Its transport wheels let you conveniently move the bike around, and makes storage simple. 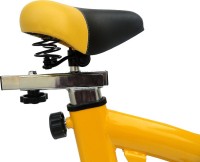 Kobo ensures that working out on this bike does not take a toll on your joints and knees. The machine is designed to function smoothly and silently. Work out on this bike regularly to tone your muscles and burn unnecessary fat.

The seat isn't at all comfortable.
READ MORE

Thanks to kobo for this product with the affordable price.
READ MORE

Please dont buy this product. Just after 2 days of use the cycle started giving out a screeching sound while pedalling. The seller refused to help since the 10 day replacement had ended 2 days ago.
READ MORE