Description
Kobo Orbitrac is scientifically designed to achieve perfection regarding upper as well as lower body workouts. It is an ideal machine to achieve your cardiovascular targets and workout goals in a safe and secure manner. Kobo ensures that working out on this machine will not take a toll on your knees and joints. The pressure can be regulated according to the preference of the user. Easy to assemble. Buyer has to assemble himself. Assembly manual inside the packaging.
Read More
Product Description
Specifications
In The Box
General
Feedback Mechanism
Body Features
Power Features
Additional Features
Dimensions
Important Note
Frequently Bought Together 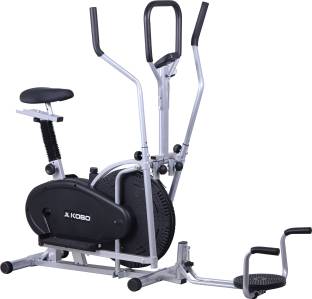 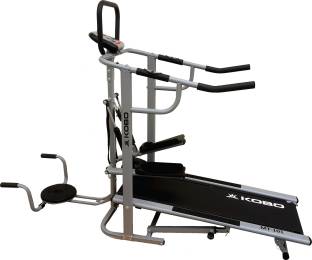 A wonderful experience so far...using it for here days...would surely update after a month
Awesome service from flipkart...packaging timing everything....
About the equipment now
1. You have to assemble on your own which is little time consuming but surely possible...just follow the instruction manual word by word...it took me around 2.5 hours on my own...All the relevant screws have been packed along with the part where it would be used. So keep in mind while opening the package...the twiste...
READ MORE

Very nice product! Cross trainer, twister, push ups, etc all in one. Metal finishing and coating looks very fine. Product looks elegant. Product assembly is very easy and neatly explained in the attached manual. I got it for 9501 (including 252 delivery charges). Delivery should have been for free as it is available on Kobo's website with free delivery.
READ MORE

The product was received in good condition barring one or two small scratches. Assembling the bike took around 2 hours for me and my dad. The instruction manual is fairly easy to understand. Keys and wrenches for fixing different nuts and bolts were also included. Overall a good purchase at 50% discount.
READ MORE

Dont buy this product from this seller atleast

My experience was very bad with this coz the seller send me only the left side rods for both right and left and i faced so many problem with that.....finally i have to edit it by myself and i take dat to welding shop and i get it repaired then it worked for me....but over all very bad seller and very bad company....shame on you guys...you are taking so much money and still you are not sending the proper material...!!
READ MORE

It's such a waste of the product..., No quality..., Everyday damage something for this product..., I loss my cash.. please didn't cheat other people
READ MORE

Within a week producing lots of noise. Unable to bare the noise, no seller details available. Feeling bad that I got waste product
READ MORE

Steppers
Min. 40% Off
Shop Now
Back to top