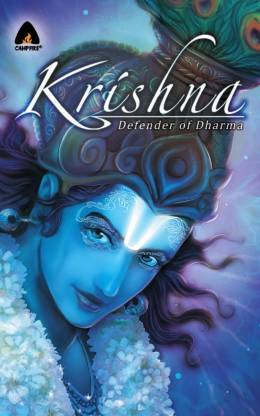 Get notified when this item comes back in stock.
Home
Books
Philosophy and Religion Books
Religion and Belief Books

Krishna: Defender of Dharma, published by Campfire, is an enchanting graphic novel. Krishna, the eighth avatar of Lord Vishnu, fights Kansa, the tyrant emperor of Mathura.

Krishna had to fight evil from the time of his birth. All his life, he not only had to fight demons, ogres, and monsters, but also kings, princes and soldiers. This time, Krishna has to fight evil which has disguised itself as Kansa. This tale of valour, and the victory of the good over the evil, is brilliantly captured in the graphic novel, Krishna: Defender of Dharma.

Campfire is one of India’s foremost graphic novel publishers, based in New Delhi. They bring out the timeless classics of English literature in the form of graphic novels, including the works of Sir Doyle, Dickens, Shakespeare and Austen among others. Their mythology section includes Indian and Greek mythologies. They have also brought out graphic novels based on the real life stories of inspiring personalities like Steve Jobs, Abraham Lincoln, Muhammad Ali, Nelson Mandela and Mother Teresa among several others.

I just don't have enough words to praise the shape this book has taken. Knowing Shweta is a honor! :-). She has just virtually produced the actions in a simple, short and crisp manner. Penning down different episodes of the life of Krishna is no easy task. It needs immense work, research and the knowledge to portray the actual meaning of what the character conveys. I've always admired Krishna and his romance with Radha. I only wish there were more episode of Radha in the book! :-)
I must also...
READ MORE

superb book.. covers pretty much all aspects of Krishna's life in a very concise manner.. graphics are amazing as well...think we finally have our answer to the marvel universe in campfire publications :)...is a good ready for adults as well as children and would definitely recommend a buy!!
READ MORE

I purchase this graphic piece for my 4 year old and i am proud to say that i was correct in my decision of purchasing this book. Very handful and covers important things for a child, my son is deeply engrossed in the books because of the colorful and well illustrated writings. I am thankful to flipkart for such a beautiful product as it has encouraged interest mythology to my son. Needless to mention the delivery was also well in time with proper packaging. Thanks Sudipa Chatterjee
READ MORE

Its also written, from the Perspective of Sri Krishna, which makes it even more better to read, just as with the comic: Ravana - Roar of the Demon King...

And the colours are so bright and the art work is so captivating, its simply a wonder to behold...

Also, during Jarasandha's episode, there's a Map of India during the Dwaparayuga displayed!! :D That was another wonder to watch :) :) :)

All in all, a real treat for any age group, A Real piece of work, all right!!
READ MORE

This is a superb and brilliant depiction of the life of Krishna, the book has been beautifully divided into chapters and I got to know facts which I didn't knew before. A must recommend for graphical comic book fans !
READ MORE

The best graphic novel of Lord Krishna ever!

Mesmerizing arts with unique beauty, this novel gives classic style of composed narration of the stories of Lord himself.From mischievous days of gokul to romantic pastimes in Vrindavan, you will feel their vividness right before your eyes. Kamsa's defeat in Mathura followed by the battlefield of Kurukshetra when the Gita-" the Song Celestial " was woven and last days in Dwarka, everything seems to have harmonious blend of colors and joy of wonderful writing.
READ MORE

This has to be the best graphic novel I have read that has been based on any Indian character. The quality of the graphics is top notch. Great story. Beautifully interwoven into the graphic novel format. Look forward to many more along the same lines.
Wish Campfire the best, and hope they release a lot more novels based on Indian characters. If anything, I just had a minor complaint. i had ordered 1 graphic novel earlier for my nephew. But I liked it so much, I went ahead and ordered a...
READ MORE

The illustrations are excellent. The artist has given a fresh touch to the depictions of a lot of characters. It's a very good job considering that the whole of the Mahabharatha dealing with Krishna has been so concisely reproduced in such refreshing style.
READ MORE

A brilliant representation of Lord Krishna life and his miracles (leela) in comic form. A must buy for all people interested in Hinduism.
READ MORE

Just awesome. A graphic novel. Gives a lot of information about Lord Krishna which you might not have known.
READ MORE