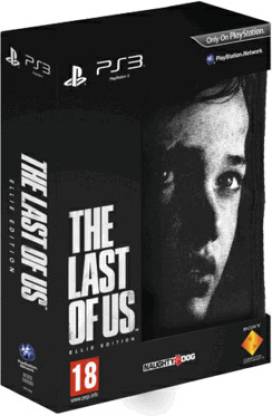 The Last of Us is set in a post-apocalyptic world where the human population has been decimated by a cordyceps-type fungus. This modern-day plague turns the infected into mindless zombie-type creatures that are hell-bent on spreading the infection. This particular version of The Last of Us is the Ellie Edition and it comes with some extra goodies for the discerning gamer. In addition to this exciting game, this set also contains a mini art book, mini comic, exclusive game pack, collectable poster and a custom skin for your PS3 controller.

Survive the dreadful post-apocalyptic world with an array of weapons and your killer instinct. The Last of Us is a survival horror action-adventure game that explores the dark side of a world turned upside down. Play the campaign in single player mode or play in multiplayer mode with your friends. This exciting action game has been developed for the PlayStation 3 by Naughty Dog Software and published by Sony Computer Entertainment. As this game contains intense violence, blood and gore, sexual content and strong language it has been given a rating of 18 by Pegi and Mature 17+ by ESRB.

A cordyceps-type fungus has infected the human race and devastated the human race. Millions of people die and turn into mindless humanoid creatures that attack survivors to further spread the infection. The U.S Military has set up quarantine zones where regular checks for infection are conducted. Martial law has been declared and a brutal, harsh and oppressive regime control the zones. Joel, a seasoned black-marketeer, survives in the quarantine zone by smuggling and getting people what they want for a price. During the course of events, Joel, promises a friend that he will help smuggle a 14 year old girl to safety, away from the oppressive military regime.

Ellie, the girl, is wise beyond her years and has to get to a resistance group called the Fireflies. The only character you control is Joel, while the artificial intelligence controls Ellie. Travel through cities and towns taken over by nature and ensure you protect Ellie throughout. Fight mindless infected humans and ruthless humans who want to rob the supplies you are carrying. To make things worse, the military also launches a campaign to capture Ellie and bring her back to the quarantine zone. Conserve your bullets as weapons and ammunition are in short supply.

Naughty Dog Software's advanced AI system known as the Balance of Power empowers the enemies you fight to react realistically to your attack. They will take cover while you attack, call for backup and surprise you with tactical maneuvers. To any situation in the game you can try different attack plans with the help of the Dynamic Stealth feature.

Gameplay will BLOW your mind !

Of course, I haven't played the game yet, not even the Demo that comes with God Of War :A scension. But I just want to say that, this is the most awaited game for ANY PS3 fan YET! We saw what Naughty Dog did with Uncharted series, the kind of graphic content that was displayed on a 6 year old console like PS3, imagine what they will be capable of producing on the new-gen console PS4. I've been constantly in touch with all of its gameplay videos and demos and stuff, and I haven't seen anything...
READ MORE

It hooks you to your controller till the credits finally roll. Also, there is only one loading screen when you start the game. From there on, you won't see any loading screen. This further helps in creating an engrossing attachment with the game and all of its characters.

I see a few people claiming this game sucks and they love their ACTIVISION crap. I feel sorry for them as they are completely missing out on what the games are capable of if they are made properly and have good producti...
READ MORE

This is the best game out there and a must buy. The story just grips you and before you know you are gripped in their journey to the Fire Flies. The AI is intelligent and can surprise you at times. Bloaters are fun to kill and so are those stealthy shiv kils on the clickers.
Naughty Dog - Thanks again for this wonderful game.
READ MORE

Ahhh!! Naugthy Dog, which is one of the prime studios owned by the Sony.Everyone knows its story telling prowess and The Last of Us is no exception.At last year's E3 The Last of Us was a huge surprise to everyone.
The game is set 20 year's after the pandemic ridden United States, and there is no option but to survive at any cost.You are put into the shoes of cold and ruthless character Joel who lives in quarantine zone of Boston and has a huge task of sneaking out the little girl Ellie across...
READ MORE

been a gamer when gamer terms doesnt exist, i would in my last 18 years of gaming..this is one of the best game i have played...clean buy, worth every Rs..
READ MORE

hi buddies....this is the best game.....huh i dont have words to explain its awesomeness .......just go on and buy it or you will regret of not buying it.....
my psn id is "saumilratnkar_g"....
c mon add me to get multiplayer achievement.....
add me .....saumilratnakar_g
AND LAST OF ALL. GO ON BUY THE GAME SO YOU DONT REGRET DONT BUYIN IT WHEN ITS OUT OF STOCK....
READ MORE

very much exited to ply this game hoping the delivery wont take a lot time i have pre ordered the Elli edition ... so just cant wait and recently the multiplayer game play have been reveled it is just awesome cant wait... and all who are playing this game can add me on ps network NIL123094
READ MORE

0
1
Permalink
Report Abuse
+
All 7 reviews
Have doubts regarding this product?
Safe and Secure Payments.Easy returns.100% Authentic products.
You might be interested in