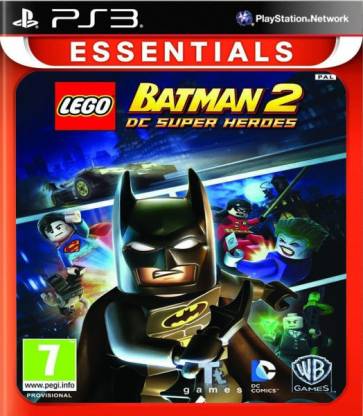 LEGO blocks are cute and always fun to play with. Taking this idea forward, developer Traveller's Tales have been bringing out a video game series that have super heroes shaped as LEGO blocks. With Lego Batman 2: DC Super Heroes you get to see how villains in the DC universe are coming together to corrupt the plans of super heroes. Expect smart and funny jokes as you see the story in the game move from crazy to insane and yet sound realistic enough to be cared by all.

The sequel to Lego Batman: The Videogame, Lego Batman 2: DC Super Heroes features many playable DC characters. The game is targeted towards gamers who like LEGO characters and DC superheroes. The open world action-adventure video game has interesting features that will keep you glued to your TV screen for hours. The game DVD is available for the PS3 gaming console and carries an E10+ from ESRB.

In Lego Batman 2: DC Super Heroes Lex Luther wants to become president and he will go to any extent to become one. He is so determined that he has teamed up with the crazy villain named Joker. Together they are devising an insane plot that will allow them to take down the superheroes. Batman, Superman and Robin must now get together and attempt to stop the dangerous duo before they become successful in hatching their evil ploy.

Developed by Traveller's Tales and published by Warner Bros. Interactive Entertainment, Lego Batman 2 is a very enjoyable video game. The controls in the single-player campaign have been kept simple. Each button press will allow you to jump, punch and easily switch between different superheroes.

Each new superhero featuring in the game has unique powers. Characters such as Black Canary can access her sonic blast; Cyborg is fully magnetized and so on. The game contains 15 chapters, giving you more than 8 hours of gameplay. You can find many collectibles that are spread throughout the game such as mini-kit parts and more. The game offers tremendous replay value as you will keep playing the levels you have played to earn an in-game currency named studs.

If you like a challenging game where special items are smartly hidden, then this is the game for you. You can search the entire city of Gotham and specific places such as Arkham Asylum, Ace Chemicals, GCPD and many others. The game allows you to unlock cheats. This can be done by finding red bricks that are hidden around corners.

You can purchase many new vehicles with the studs you collect. There is also a special collectible item that is available very rarely in the game known as Gold Bricks. These are level-based challenges that can be unlocked by playing as certain characters and are very interesting to play. If you like playing game with a friend you can in this game as Lego Batman 2: DC Super Heroes supports multiplayer.

The addition of multiplayer enhances the excitement as you can team up with friends to become a clan of superheroes and take down the villains more effectively. The game’s environment is created very well and the animations appearing onscreen are smooth flowing. The game has a stellar soundtrack and even includes background scores from films such as Batman Begins and Superman Returns. The updates, demos, wallpapers and other content for the game can be downloaded from the Xbox Marketplace.

Childish but BEST LEGO GAME YET