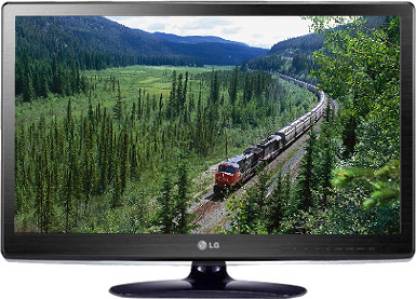 The LG 22LS3300 LED HD Television is designed to consume much less electricity when compared to other contemporary televisions. The Smart Energy Saving feature ensures that in standby mode only 0.5 W is consumed. This LG television set comes with an ergonomically designed remote control and a sturdy stand to fix under it.

This LG LED television has a 22 inch screen size that is perfect for the bed room or to set up as a gaming station for your kids. New games come with high graphic requirements that can be accommodated by this LG 22 inch Television as it comes with a screen resolution of 1366 x 768 pixels. This LG HD Ready Television weighs 3.2 kg without the stand and 3.5 kg with the sturdy base stand. Ensure you pick up a television stand or wall mount that can safely hold this LG television with dimensions of 523 x 376 x 139.5 mm with the base stand and 523 x 339 x 31.6 mm without the stand.

The LG 22LS3300 LED 22 inch HD Television features the Advanced IPS LED LCD Panel coupled with Edge LED technology to deliver accurate visuals even at very high resolutions. With a Motion Clarity Index [MCI] of 100 even fast paced actions on the screen will be clear making it a perfect companion for action games. The LG 22LS3300 HD Television comes with 2 powerful in-built speaker capable of playing at high volumes clearly. Throw a house party and put on a few tunes on your LG television with a total speaker power output of 14 W. The sound mode can be set to Mono, Stereo or Dual mode to enhance the sound quality based on the content. The screen off function allows you to switch off the screen while the sound continues to play, which is helpful for those who like to listen to their favorite music channel while going to sleep.

The LG 22LS3300 HD Television comes with advanced connectivity features that allows you to plug in your favorite devices without a hassle. Use the USB 2.0 port to connect to external storage devices like a hard disk drive or pen drive to listen to music or check out photos. The lone HDMI port allows you to connect high-end gaming consoles like the PlayStation 3 or Xbox 360 for extreme gaming action. Connect your desktop or Laptop computer and use this LG LED television as a larger screen while working, watching a movie or just playing games. Additional features include the clock and sleep timer which can be set to switch off the television at a certain time.

Good product if not great.

Its got a superb picture clarity and great sound with 14W sound output. No other TV has such good sound output at this price range. The sound is good enough for a kitchen or a large bedroom if you are short on budget and looking for a small TV. It comes with Edge-LED technology and thereby looks sleek and classy. No fancy buttons nothing, everything is based off touch controls. The system settings are simple and neatly laid out. I primarily got this TV for playing games on my XBOX. My room is...
READ MORE

I recently purchased this television and so far i am completely satisfied with the kind of quality and the clarity LG has provided in such a small price.

Viewing angel is good .. Easy to setup (If you know a lil about the gadgets). Very bright display, Sound is Superb! The only television which has such great output of 14 W

FLIPKART delivery as always HATSOFF to you guys!

Its a decent TV with decent features which would be used normally.Have started using TV & i m satisfied. Only prob is it cant play Videos from USB,speakers are good.Price ia also competative & LG service is aslo good
READ MORE

I have received this TV within 72 hours,thanks flipkart for awesome packaging,TV has good features except 1..you can not play video or movie with USB...bcoz doesnt support movies format..you can watch pictures and listen movie only with USB.
READ MORE

0
0
Permalink
Report Abuse
+
All 4 reviews
Have doubts regarding this product?
Safe and Secure Payments.Easy returns.100% Authentic products.
Back to top