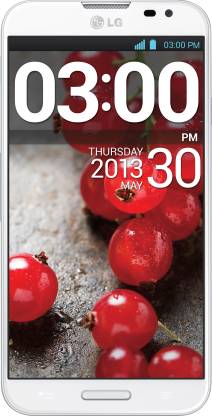 Flagship phones are always designed to be very powerful and future proof to a certain level. The LG Optimus line of phones has been in the forefront of the LG arsenal when tackling the competition. The Optimus G Pro is a Candy Bar model with a single SIM slot. The GSM phone is very well suited for power users as well as Android fans.

System and Memory
The Device runs on the latest Android Jelly Bean OS with v4.1.2. This, together with the Optimus 3.0 User Interface, gives you a truly smooth and fluid performance in terms of transitions and general graphics as well. The graphics in the device is supported by the Adreno 320 processor. The phone itself has a 1.7 GHz Qualcomm Snapdragon 600 Quad Core processor. This immense processing power lets you shred through tasks with the device, and it experiences almost no lag or difficulty.

The LG Optimus G Pro phone has a RAM of 2 GB, which leaves you ample space to carry out a ton of multitasking capabilities. The Optimus smart phone has an internal memory of 16 GB, of which 10.5 GB is User Memory.

The phone comes with a massive 3140 mAh battery that can last you for a very long time before needing a recharge, as compared to most other Android smartphones in its class.

The capacitive screen has a massive size of 5.5 inches with IPS Display and Corning Gorilla Glass 2. It can support 16 M colors to give a truly pleasurable viewing experience.

Camera and Multimedia
The phone comes with a primary camera of 13 MP. High quality images are possible under varying conditions with the right settings engaged. The secondary camera of the device has a sensor of 2.1 MP. The LED flash is adequate in lighting up the subjects in the dark. It is capable of HD Video Recording at 1920 x 1080 p at 30 fps. The phone also supports GPRS, EDGE, WiFi, 3G and Bluetooth as well. It comes with A-GPS and Google Maps. The LG Optimus smartphone can also serve as a very versatile media player, supporting all the major formats, including FLAC and MP4 as well.

Hello Flipkart Readers:
Today I am posting the review of LG optimus G pro. Please tick thumb up if you like the review.

I got this phone a 10 days earlier from Flipkart (Why I am Not official Buyer ?),I was looking for the nexus 4 or Galaxy note 2, but when I see this phone on FlipKart. I couldn’t resist buying it. I think that was the best decision ever I made for mobile phone. Reviewing without any delay, let me write about this phone and my thoughts over buying this as better choice than...
READ MORE

Respect the badge, love the phone

After using it for over two weeks, I am glad I took a chance with this. The only reason people don't know much about this is that, surprisingly, LG has not advertised it at all in India.

Go read/watch reviews like I did and you would know that for the current price (Rs 33000), it is awesome.

Positives: #The only 5.5 inch HD phone with PPI of over 400. Well PPI's don't matter unless remarkably low.
#Amazing 3140 battery. For a phone this size, can surprisingly give a little over ...
READ MORE


Me and My Friends Looking to buy this product on Flipkart as it providing a Gud deal.......


Its a Nice Mobile better than Note2....
READ MORE

A Review after 2 months of usage

I purchased this phone about 2 months ago. LG was not really in my consideration list as far as smartphones are concerned. I happened to see this handset on display at one of the mobile shops and what really grabbed my attention was the superb display quality, as compared to Samsung's AMOLEDs. Another thing was, this was a 5.5" screen in a relatively slim bezel, plus the UI was absolutely smooth. The GPS manages to lock on accurately within 30 seconds, which is commendable.

This has a massi...
READ MORE

Best phone by LG so far ! dam huge screen .i have a G pro and it rocks.It has a 1.5 quad core processor which is super fast and the audio is pretty good as well.It is better than many other samsung phones at this range (better than my samsung Galaxy S4 ).I brought this phone yesterday (However not from flipcart) and I have not charged it even once,that is,the battery life is also superb.yesterday I installed around 10 apps in it and it still has a lot of space remaining.If you are the MUSIC L...
READ MORE

Amazing spec with the price i have ever seen, but i didn't understand one thing what does it makes difference with the color???
why there is a change in price for change in color...??
i don't know what Lg trying to do??
except that good phablet, recommended to have it.. not even a single lag in the phone, after root its amazing.
READ MORE

well its a very good pone and the touch responsiveness is brilliant and for a 5.5 inch phone the ppi is amazing
Verdict
Pros:
Fast
Good For Gaming
Brilliant Os and many more
Cons;
the looks a bit uncommon
READ MORE

Nothing less than awesome

A classic mix of serious smartphone features with not the highest end configs in any dept.

But this is a mix of better features of all. Not all powerful 800 but great performance from 600 Chipset. 5.5" Full HD screeen with 13 MP camera..not the best camera but still does a pretty good job. A very vibrant display with ...
READ MORE

Recently updated to Android kitkat 4.4.2. The new update was super cool. Now I am even more happy about my phone after more than 8 months of use for its specs and price.
After using the phone for some time, I did some minor update and after that, I faced little problems like Data connection won't start and Even though my mobile says that I had signal(wrong signal strength - shows only one point and will be hung there) in phone it used to say out of coverage area if calling from other mobile....
READ MORE

I am using this phone from 2 weeks.
It is simply superb.
Screen, Gaming, Videos, everything is excellent.
I feel a bit disappointed with camera.
May be the reason for my disappointment is i have a SLR camera which gives better pictures.

Except that everything is amazing. No need to look back to upgrade this phone for at least 2 years.

I am eagerly waiting for KITKAT update for India. Its already out in S.Korea.

1
0
Permalink
Report Abuse
+
All 97 reviews
Have doubts regarding this product?
Safe and Secure Payments.Easy returns.100% Authentic products.
Back to top