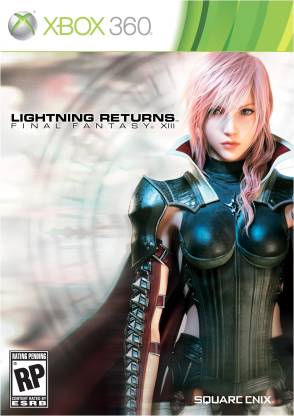 The only way a gamer can truly indulge in the depths of his imagination is by being a part of the ultimate fantasy. A third-person role-playing action game for the Xbox 360 console, Lightning Returns: Final Fantasy XIII is set 500 years after the events that occurred in Final Fantasy XIII-2 and follows Lightning, the central character in Final Fantasy XIII and a vital one in Final Fantasy XIII-2, who, after waking up from her hibernation, sets out to save the masses and her loved ones by bringing about balance to the dying world during the last 13 days of its existence following the deity Bhunivelze’s command. As she treads along the perilous journey, she understands the truth behind the Chaos that has been unleashed from the Unseen Realm as well as the actual intentions of Bhunivelze.

Developed by Square Enix and tri-Ace and published by Square Enix as well, the gameplay of Lightning Returns: Final Fantasy XIII sees the player controlling Lightning and interacting with the objects, people and enemies that she is confronted by along the voyage. Having received a PEGI rating of 16, this game hosts an open world environment that lets the player roam about the many towns and country areas; you get to accept quests from different NPCs when exploring too. Easy, Medium and Hard are the three difficulty levels that are available, each of which is unlocked after completing the preceding mode of play. Lightning has the ability to stop time by using a skill called Chronostasis. As the player completes more and more quests, Lightning’s stats are boosted. Time is a crucial factor in this game. You have 13 in-game days to complete your mission, however, you can extend the amount of remaining time by collection portions of Eradia and giving it to a tree called Yggdrasil. There is all this and much more that awaits you in this dream world!

Her journey comes to an end.

Lightning Returns is the final part of the final fantasy 13 saga, though a drawn out saga; it was by no means uninteresting. The final part of Lightning's journey encompasses her on a mission to save souls in order to bring them to a new world. Now awoken from her crystal stasis, she has been tasked bhunivelze with her mission and at the end of it; will she become the savior that the false god wants or will she be her own savior?

Many people have looked down on the 13 saga as mediocre to the...
READ MORE

First, about Delivery by FLipkart:
Game is Original Sealed PAL game. When I received it was well packed. It reached In time.

Second about the game:
This is last series is FF13. As I am FAN of Final Fantasy, this is entirely different compared to other series.
Here you can play with only one character "Lightning". Battle system is changed and I liked it.
Also its a time based Game. Challenging is how best to complete quest in given day and extend no.of days.
READ MORE

Don't let the reviews fool you.it is an end to amazing jounrey,with lot of fan service .Well told story,rich and deep combat mechanics .Awesome sound track.This has been regraded as one of games that could go down as cult classic on NeoGaf.
READ MORE

I have been a final fantasy fan since childhood though i havent played titles before VII in the franchise, i have played FFXIII and would not say great in the franchise but i liked it anyway, XIII-2 was ok but i disliked the crystarium system in XIII-2 but the story was alright, about LR, i watched reviews and they've all given mediocre rating which were disappointing, i tried the demo and i thought it wasn't that bad as they say though a lot of mechanics have been changed, this is the end of...
READ MORE

if you buy this game ur simply an ASS

please dont buy !!!
totally shit game . the player is quite seductive but it is not good.
seriously i have played this game n after analysing this shit game i even broke my ps3.
please i would recommend dont buy.
READ MORE

Almighty Bhunivelze, god of light, stands above other gods and holds the world in his palm.After creating Pulse the wild, Lindzei the wise, and Etro, the goddess of death and Chaos, Bhunivelze retreated from man's sight and slipped into a long slumber.
It was Bhunivelze who called to Lightning, forcing her to awaken from her long crystal sleep to become the savior. And he made her a promise: if she completed this great task for him, he would use his power to bring her sister, Serah, back to h...
READ MORE

Good for FF13 fans, not as bad as reviews make it seem

The finale of the FF13 triology, this game is a weird mashup of great concepts and uneven pacing. The story is laughable, but the battle system is amazing as always, and unlike its predecessor, you wont need to pay quite a bit more to access the entire story via dlc.

The most polarizing mechanic, the constantly running time, reminds one of another game with a lot of depth but wasted potential, Breath of Fire: Dragon Quarter. Indeed, its strange that the creators took two completely opposing ...
READ MORE

0
0
Permalink
Report Abuse
+
All 7 reviews
Have doubts regarding this product?
Safe and Secure Payments.Easy returns.100% Authentic products.
Back to top