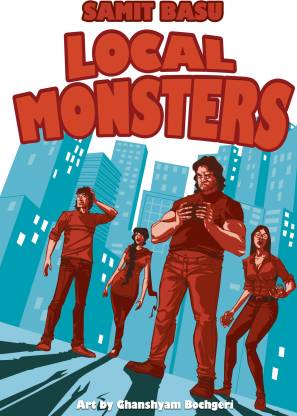 Delhi is a tough city to live in. It’s tough enough on humans, and it is certainly tougher on monsters. Being a monster might mean having a few fangs, horns and some supernatural powers, but these don’t really help when dealing with the extreme hostility of the world around you. In fact, having these powers and appendages turn you into a target for secret government agencies, inter-dimensional conspiracies and a whole set of other troubles. Everyone in your life either wants to kill you or control you. That doesn’t free you from the electricity bill of course. In this stunningly illustrated graphic novel, welcome to the city of Delhi, home to monsters and men alike.

Samit Basu is an Indian novelist, graphic novelist and screenwriter best known for his work, The Gameworld Trilogy. He has also written Terror on the Titanic, Turbulence and Resistance. He has also worked on the comics: Devi (issues 3 to 10) and The Tall Tales of Vishnu Sharma.

Ghanshyam Bochgeri is an Indian illustrator and penciller.

Deconstructive Parody, which would be the genre this graphic novel falls in.

We have Latha a southern siren, literally. Bela a half vampire (No relation to Bella) whose blood thirst manifests itself under extreme circumstances such as when someone insults Sourav Ganguly (she is a Bengali) or plays Himesh Reshammiya songs. Tashi a yeti. And of course Indrajit, a monster who is best left unsaid. They are brought together by their landlord, Professor Vyas the mad scientist.
Full of, tongue-in-c...
READ MORE