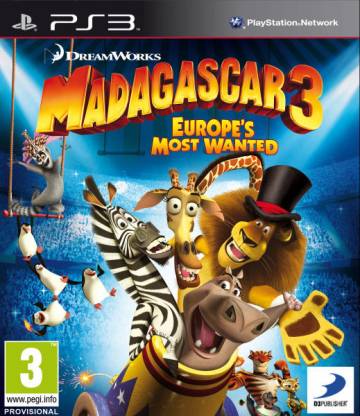 Don the role of Marty the Zebra, Alex the Lion, Gloria the Hippo and Melman the Giraffe and go on a grand adventure with bunch of crazy penguins on your side by playing Madagascar 3: The Video Game. The game is targeted towards children as well as teenagers who have come to love the characters in the movie series. The action-adventure game has many interesting features that will keep you glued to your television screen for countless hours in a day. The game DVD is available for the PS3 gaming console and carries a 3+ rating from PEGI.

Madagascar 3: The Video Game’s story follows the adventures of Marty, Alex, Gloria and Melman as they try to escape from the evil clutches of Captain Chantel DuBois. All four of them try to outsmart the Captain so that they can get back to their favourite zoo back in New York. You, playing as one of the movie characters, will be on-board a travelling circus which will take you across the continent of Europe as you devise a plan to get back where you belong.

Developed by Monkey Bar Games and published by D3 Publisher, Madagascar 3: The Video Game is a fun game that can be played by the entire family. The single-player game in the series will allow you perform extraordinary circus acts throughout Europe. With notable acrobatics to be performed over world renowned places, Madagascar 3 adds a ton of content that can be played over and over.

Donning the role of your favourite characters you can jump, soar and swim across challenges spread throughout the game. You can even perform publicity stunts or put up posters for your circus to make it popular across Europe. If you like playing video games with a friend, Madagascar 3: The Video Game allows you do that as it features co-op multiplayer. With this feature available, any player can jump-in and out while playing the game to help you complete it.

Many new characters to the movie have also been added to the game. These include Gia the jaguar, Stefano the sea lion, Sonya the bear and Vitaly the Siberian tiger. The updates, wallpapers and other extra content for the game can be downloaded from the PSN Network.

She really likes it and most of my weekends go playing it for her.

However sometimes its difficult to figure out the next steps, especially in the story mode.
READ MORE