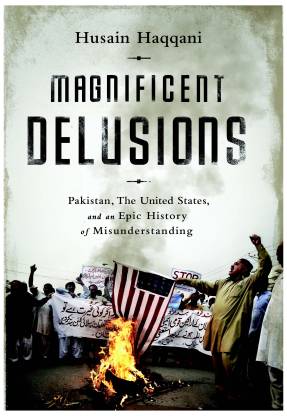 Pakistan’s tryst with the United States of America is one that has always been masked with confusion. There has always been little clarity whether both existed as allies or enemies in their dealings with each other. Written by Pakistan’s Ambassador to the United States, Magnificent Delusions deals with the relationship of the two nations from the eyes of a man who knew it best.

Haqqani reveals that the USA and Pakistan both had a contorted idea of what an alliance with each other meant. While the USA believed that backing the Pakistani Mujahideen led to Charlie Wilson’s war of Afghan liberation, what really ensued was General Zia-ul-Haq’s machiavellian tactics in play. John Foster Dulles, a US Secretary of State, believed that the British referred to the Pakistanis when they were in fact talking about Ghurkas in calling them the best fighters in the sub-continent. In contrast, Pakistani General Ayub Khan believed that once his men received American weapons, using them on India would not hinder relations with America.

Husain Haqqani is a former Pakistani Ambassador to the United States from 2008 to 2011.

Haqqani graduated from the University of Karachi and went on to a life in Journalism before his appointment as Ambassador.

Understanding the Pakistani nerve and the three As that govern it - Army, Allah & America.

Magnificient delusions is a well researched and to a large extent non partisan view of the sub continental political zero sum game with particular reference to America. It is fairly unexpected from an author of Pakistani origin especially at times to view his country without tinted glasses, to which we are used to. Though at last the authors slight reverence for Benazir Bhutto gets reflected, however it nowhere affects the essence and the purpose of the book.
The only problem I see is the boo...
READ MORE

A fantastic ringside view of the utter outmaneuvering of a superpower by a fledgling state. Again and again. And again.

A lot to learn. As a nation and as a people.

But the biggest lesson is that no amount of help or aid is enough unless you use it to educate & equip yourself to do without it.

A book that should make India and Indians feel proud and very good about their country and themselves.
READ MORE

Magnificent Delusions - clarity in the fog

was recommended this book , and it had proved to be enlightening and revealing. it is crisply written and with a readable flow. the overall feeling of bias is evidently there , but with the use of clear references and quotes, the book nullifys this feeling. it is intriguing to get an eye on how international relations and relationships are played out and its overall impact on global & local politics. This book is a must read for anyone interested in international relations & geopolitics. Sim...
READ MORE

A timely topic packed with a lot of insight.

This is a very refreshing book, while I was expecting it to contain the usual rants to be found from an author from that part of the subcontinent.

The one very intriguing aspect I found in it was how the leaders of the the 1940s era knew the importance of AfPak area vis a vis the Soviets. Makes me wonder why the partition was coerced by the Brits in the 1940s; like as if they were positioning the chess pieces for the actual events a good half-century later.
READ MORE

This book in some ways builds on the previous book by this author (Pakistan: Between Mosque and Military) but brings a sharper focus to the evolution of the US-Pak relationship. The book starts a couple of years before independence and continues right up to the end of the author's tenure as the Pakistani ambassador to the USA.

The common thread in the thinking of the Pakistani establishment over these 60+ years might not be very surprising for a well informed Indian reader: a self-fulfillin...
READ MORE

Insightful! A must read.

For anyone who is even remotely interested in the topic and wants to read about Pakistan in factual detail should pick this book.
Husain Haqqani has done a brilliant job at detailing the US - Pak relationship. Very insightful.
Magnificent Delusions, indeed!
Flipkart as usual is quick to deliver all newly launched titles with matchless speed and price. This book is quite a sought after title, thanks Flipkart for making me one of the first few to lay my hands on it.
READ MORE

The writer explains in detail the basis on US-Pakistan relations in a very well researched manner and helps in understanding the real side and why Pakistan hates USA but still wants its money. Must read
READ MORE

could have been better

bought the book given all the controversies and issues with the author and his writings, but the book is just moving to and fro in time, its like he is just teling whatever he gets on internet without managing things and timelines of events
READ MORE

The product was damaged and shoddily packed with newspapers. The book cover was spotty and soiled. The book didn't seem to be a fresh copy. Surprised that Flipkart allows such merchants on its platform.
READ MORE

From the Horse's Mouth

A superb account of the birth & evolution of a nation and its compulsive dependence on aid & paranoia. Coming from a respected ambassador, some of the stuff you read here are mind boggling. At the end of it, I was grateful of the founding fathers of my country India for being so singularly selfless and visionary. It dragged a bit in the middle overs, else it would have been 4 stars or more.
READ MORE